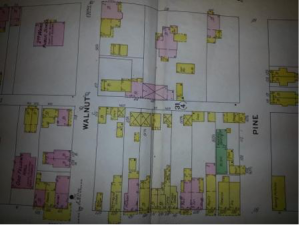 Front St between Pine and Walnut are shown in this section of the 1908 Sanborn map.

Henry & Mary Swartz were the earliest proprieters of this place of business. Later, Fred Hunter owned the building and ran a cigar store and cigar manufacturing business here until 1890, at which time he sold the building and business to John Laubach. Lauback stopped manufacturing his own cigars here in 1911, but continued to run the cigar store. Henry Zieser and William Edgar opened a lunch room at the corner of Front & Walnut in 1902, before moving to 605 Front St. Mr. Edgar became the sole owner and his widow Mary Edgar continued the business after 1908.
The Weisley Grocery Store (William and Laura lived upstairs) operated out of here before Mrs Cora Heckenberger bought 601 Front St in 1920 and remodeled the larger building to accommodate the expanded drug store run by her and her son William W. Heckenberger, the pharmicist . Angelo’s shoe repair also was located here in the early 1920’s. Heckenbergers drug store was previously at 145 Front St. After that, it became Hartzell’s Pharmacy. Hartzells later moved to Second & Church, then to American St. 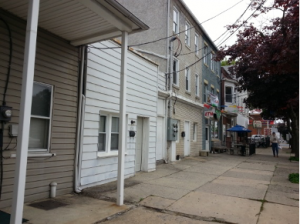 During the year 1859, George Kopp, a member of Captain Henry S. Harte’s Catasauqua Rifles, established a public house at 607 Front Street, Catasauqua. He styled the enterprise as the St. George Hotel. Upon his death, January 19 1872, The Honorable Ernest Nagle took over the operations of the establishment. Mr. Nagle, a member of the Pennsylvania House of Representatives (1877-1881), married Mary Josephine (Schneider) Kopp, the widow of George Kopp, and he managed the affairs of the business until his own death on August 1, 1893. Kopp also operated a tin business and sold stoves (and did installation) a few doors above the Eagle Hotel.

Leopold Ehle, previously a barber with a shop on the corner of Front and Bridge, married Frances Kopp, fourth daughter of George and Mary Josephine Kopp, in 1887. After the death of Mr. Nagle, Ehle became proprietor of the hotel, styling it as Ehle’s Café. During the early years of running the bar, Ehle offered free lunches on Saturdays. He turned over operations to a Mr. Guth in 1899 (taking a job as a foreman at the Allentown Iron Co and then partnering in a laundry business on lower Front St) before returning the run the business around 1905 until his death on September 2, 1916. Ehle collected unusual animals and kept a minitature zoo behind the business up until 1913. During this time, he raised exotic chickens and entered them in competitions (Madison Sq Gardens). 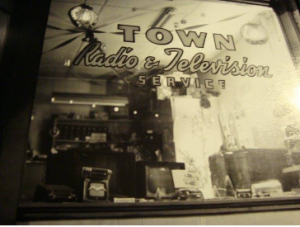 Joseph Waddick, a bar clerk for Mr. Ehle, purchased the business and changed the name to Waddick’s Café. Upon his death, his daughters Gertrude and Helen operated the establishment until their partnership was dissolved in 1947. Carl Nicklas married Helen Waddick and the bar was operated as Nicklas’ Bar from 1951 to 1955.

In July, 1955 Joseph and Doris Zemba took over the reins of the public house and changed the name to the Sportsman’s Bar. Joseph Zemba passed away on March 13, 1998 and his widow Doris Zemba continued to operate the establishment until May 17, 2001, at which point she sold both the business and the building to Antonio Castaneda. After extensive renovations, the establishment was reopened on November 3, 2001 as Tony’s Top Cat Bar & Grill.

The Town TV Store was owned by Joseph Gergal in the mid 1900s before it became Sheetz’s. Quality Meat Center was one of the earliest businesses in this building. John Davies had a shoe repair business at 609 ½ Front in 1930. 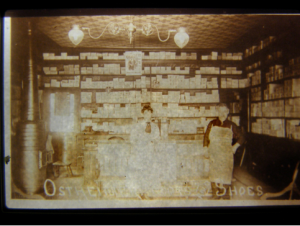 John Blum established his shoe store here in 1867. The Blum’s lived above the store. His son joined him in the business (John Blum & Son), then took over the business in 1897. Ostheimer took over management of the store in 1904, moving here from his store at 132 Front St. The younger John Blum enlarged the store in 1911. They sold shoes and boots.

A confectionery, The Blue Bird Shop, operated by the Webber Bros, was here in 1930. 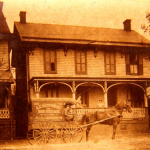 Ambrose E. Seyfried began to manufacture ice cream for the wholesale trade in 1883. Before that, he worked at the Crane, and was in charge of the blowing engines. 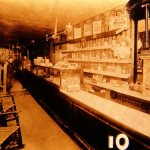 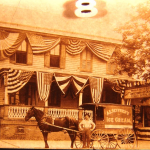 His widow, Sarah Storm Seyfried (daughter of Philip Storm) took over in 1884 after her husband’s death, enlarging the place by adding 25 feet to the building and adding a line of toys and also selling candy, cigars and oysters. Her wholesale trade grew to 20,000 gallons per year. Their daughter Gertrude married a Schneller.
Photos are from the Schneller collection. The ad pic is from the June 1914 Brown & White. 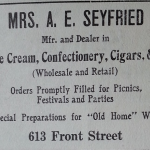 The 1929/1930 Directory lists this as a second location for the A&P Tea Co, along with the one on the corner of Bridge and Second. 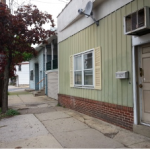 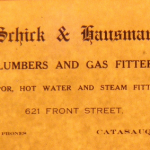 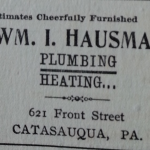 In 1935, Campbell C. Feenstra operated a plumbing and heating business out of his home on Walnut St, then moved, to 212 ½ Bridge St, before locating here. Feenstra was still here when, in 1947, Fred W. Leickel and Son (John) moved their electrical service and sales business from 120 Front St to 621 Front St. Working with them were Thomas Miles of 1109 5th St and George Holko of 26 Front St. UHL Electric was here in the 1960s.

Other Site History: The office of the Catasauqua Manufacturing Company was located here before the construction of these buildings in 1880 (see maps of 1872 and 1876.). The northern half of this block between Pine and Walnut was owned by David Thomas at that time.

In 1912, William S. Williams opened a retail green grocery/produce business here, with an ice cream parlor on the second floor.
The beverage business of “Heavy” Salvonchik and Peter “Pat” Grason opened here in 1945. 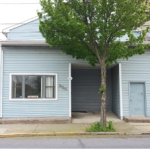 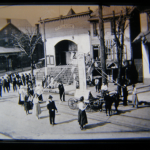 The Palace offered both movies and vaudeville attractions, being careful to stick to “elevating and clean entertainment”. It seated 350.

Other Site History:
Before the Palace Theater, William Roxberry ran a barber shop here, keeping his customers up-to-date on the baseball world. At the time, Catasauqua had one of the best semi-professional teams in eastern PA. 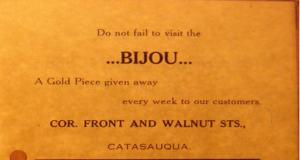 In 1930, Mel’s Restaurant and Pool, was here, operated by Melvin E. Wentz. The Varsity opened here on the NE corner in 1940 as a refreshment stand and dance hall, no alcohol. At that time, the building was owned by Noel and Katherine Wentz (owner of the Majestic Theater). The business was renovated in 1945 and remained open until 1962. In the early 70’s, it was the Kingswood; a popular spot for dinner. After that, it was Tom’s Den, then Denny’s Hideaway. From 1975 into the 80’s, it was again the Varsity, this time serving alcohol. Later the building housed the Catty Shack. More recently, it was a massage parlor.

Address: West Side of Front & Walnut

John Peter built a substantial stone home west of here near where the canal came throughl. The house later became the stable for the F. W. Wint Company and was razed when the site was bought by the Catasauqua Manufacturing Co. The barn remained into the 1900s. Peter was a weaver and, with the construction of the canal, became a locktender. This is now the site of Colonial Landscaping.