Railroads- Crossroads of the Anthracite Railroads

The arrival of railroads was key to the expansion of the iron industry, and the ability to create better quality iron was key to the construction of the railroads. The hot blast technology was able to make an order of magnitude more iron than the charcoal furnaces. But the canal and local roads were challenged to deliver raw ore to those furnaces and to transport the pig iron to foundries. The Crane built a rail system on the site of the iron works in the late 1840s to transport iron ore, limestone, coal, and slag to and from the furnaces.  The following information on the CRANE RAILROAD was take from the Dale Wint history of the Iron Borough. 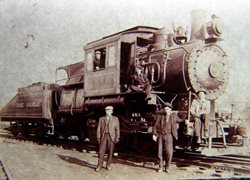 A plant railroad was established on the property of the Crane Iron Works in the late 1840’s for the purpose of transporting iron ore, limestone, coal, slag, etc. to and from their furnaces. The company operated both standard and narrow gauge railroads and in December 1904, the Crane Iron Works maintained a roster of seven steam engines, four standard and three narrow-gauge.

Over the years the Crane Iron Works continued to expand their trackage, which included a narrow gauge line running along the tracks of the Central Railroad of New Jersey to a slag bank south of the borough in Hanover Township, between the canal and the Lehigh River. An engine-house was erected at the southwest corner of Front and Bridge Streets for the maintenance of their engines. During 1857, the Crane Iron Company Bridge was reinforced and strengthened in order to carry the company’s locomotive, “The Hercules”, and the ore-cars brought in by the Catasauqua and Fogelsville Railroad. In 1904, the company removed the old wooden covered bridge and erected a new plate girder bridge, capable of supporting the weightiest and most massive rolling stock.

In order to extend certain tracks the Crane Iron Works applied for a charter for the Crane Railroad Company, July 28, 1905. Tracks were then extended northward along the course of the canal until they connected with the Central Railroad of New Jersey.

The company then decided to extend their tracks eastward into Kurtz Valley for the purpose of establishing a cinder dump. In November 1909, the Borough Council of Catasauqua approved the company’s request to construct a tunnel from the west side of Second Street, behind the company homes on Wood Street, to the east side of Howertown Road. Rights-of-way were purchased and construction began on March 21, 1910. The tunnel was actually dug out forming a cut and a concrete arched liner was put in place and filled over. The tunnel was completed by November 1910 and on March 11, 1911  a spur was completed from the Davies and Thomas Company to the Crane Railroad tracks east of the tunnel near the cinder dump. The Crane Railroad Company then had a total trackage of 3.31 miles.

The Crane Railroad was purchased by the Lehigh and New England Railroad Company in July 1914, and on December 1, 1914, full control of all the Crane Railroad’s tracks, rolling stock and assets were assumed by the Lehigh and New England Railroad, which renamed the line the Catasauqua Branch. A freight station for this line was built on the southwest corner of Front and Pine Streets in 1916.

The Lehigh and New England Railroad ceased to service Catasauqua in October 1961, when the freight station was closed. The tracks coming into the borough were removed shortly afterward and in 1964 the tunnel was sealed at both ends.”

In the fall of 1855, the first RR arrived in Catasauqua. Founded by Asa Packer, the Lehigh Valley Railroad brought coal from the north and iron ore from NJ. The tracks were located on the west bank of the Lehigh River. With its arrival, the Lehigh Crane Iron Works became less dependent on the canal, which froze over in the winter, and local dirt (mud) roads, for delivering raw materials for their furnaces,   The first quality rails to be made locally were made at Phoenixville.  Started in 1790 as the French Creek Nail Works, by 1830 Phoenixville Iron was the largest nail manufacturer in the country.  The canal along the Schulkill River opened in 1825 and the Philadelphia and Reading RR arrived in Phoenixville in the late 1830s.  A blast furnace (which began construction in 1840). by 1842, had a capacity for making 1,500 tons of pig iron per year.  The refining furnace had equal capacity and the rolling mill could convert 3,000 tons of pig iron into bars per year. The mill employed 147 workers.  Sayre of the LVRR reported in 1861, “What is now particularly wanted to give us first class track and reduce the annual expense of its repairs is a better quality of iron. None that we hare ever used except that purchased from the Phoenix Iron Works, when the track: was first laid, has proved really good. If an advance of ten dollars upon the price annually paid will secure iron of first quality, I am well satisfied that no investment that can be made will yield so large and satisfactory a return.”  Interestingly, John Fritz, later to partner with Sayre and Packer in Bethlehem Iron for the purpose of making iron rail, built the Union Foundry in Catasauqua in 1850 to make rail, using his idea for a three high rolling mill.  Unfortunately it was not as successful as he had hoped, and sold the business a year or so later to David Thomas.  The Union Foundry continued to make structural iron products into the early 1900s.

In 1862, Sayre was enthusiastic about prospects for the LVRR (same link as for 1861), “The iron works on the line of our road are prospering and now bid fair to give us a large increase of tonnage next year. The Thomas Iron Company expect to blow in one of their new stacks during the winter. I understand the Messrs. Thomas design erecting a rolling mill at Catasauqua and Mr. Lewis is about building one at Allentown Furnace. The Allentown Rolling Mill has been in successful operation since May 1862. The Bethlehem Iron Company expect to make pig metal and rails later on. The Glendon Iron Company have built a substantial bridge across the canal connecting their works with our road, all of which will add largely to our tonnage. The time is not remote when we will be required to transport a million tons of coal to supply the iron works on the line.  In addition to the coal tonnage to be derived from this connection there will be about 40 millions of feet of lumber manufactured annually in the upper Lehigh Region, all of which will pass over the Penn Haven and White Haven, and at least half of it over the Lehigh Valley Railroad. The distance between Wilkes Barre and Philadelphia via Catawissa and Reading Railroads is 188 miles. Via Delaware, Lackawanna & Western and Belvidere Delaware Railroad it is 184 miles. Via Penn Haven and White Haven, Lehigh Valley and North Pennsylvania, it is only I34 miles. The great difference in distance in favor of our line will, without doubt, give us the entire passenger and miscellaneous freight business between Wyoming Valley and Philadelphia.”

After arrival of the LVRR, industry expanded rapidly in Catasauqua, by 1860, the town had 400 dwellings and a population of nearly 3000. 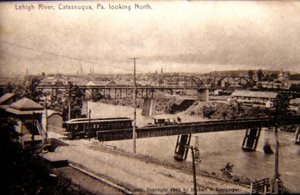 The next railroad to arrive was the Catasauqua and Fogelsville RR. The Lehigh Crane Iron Company, assisted by the Thomas Iron Company, sought a charter from the state for a railroad from Catasauqua to Fogelsville. After prolonged efforts by James W. Fuller I, the railroad charter was secured and construction on the Catasauqua & Fogelsville Railroad began in the spring of 1856 with the formal opening of this line during the summer of 1857. The officers of the Catasauqua and Foglesville Railroad were all Catasauqua industrialists: David Thomas, President; John Thomas, Superintendent; Joshua Hunt, Secretary; John Williams, Treasurer.  The station was located on the west side of the river, directly across the tracks from the LV RR. The line reached Trexlertown in 1860 and Alburtis in 1864, connecting with the East Penn RR. Passenger traffic was established by Charles Chapman, sup’t and engineer of the C&F RR, in 1875.

In 1868, The Lehigh Coal and Navigation Co completed a line linking the Wyoming Valley along the Susquehanna and Easton, which they leased to the Central New Jersey Railroad (CNJ). This line passed through Catasauqua on the east bank of the Lehigh River carrying anthracite. There were numerous freight offices in the borough that shipped across both the CNJ and LVRR lines. The Central RR of New Jersey built a two story office buiding along the tracks on the south side of Race St, which later became the home of an unsuccessful silk mill and then the Smith Candy Company. Both rail lines also had picturesque depots as shown in the post card, Lehigh River, Catasauqua, PA Looking North.

In 1882, the Thomas Iron Company secured complete ownership of the Ironton RR, which hauled ore, coal, limestone and iron for the plant in Hokendauqua.  This first runs on this line were in 1860 carrying iron from Ironton to the furnaces along the Lehigh River.  The line, as initially built, ran from the mines at Ironton down a small tributary to reach Coplay Creek, and then followed the creek to the vicinity of Egypt. Here the creek turns south, and the railroad continued east over a small ridge to meet the Lehigh Valley Railroad on the banks of the Lehigh River, on the north side of Coplay. Limonite ore from the mines along the railroad was shipped to iron companies along the Lehigh River via the Lehigh Valley Railroad. The closest was the Lehigh Valley Iron Company, just south of the interchange in Coplay; Thomas Iron, in Hokendauqua, and Crane Iron in Catasauqua were further downriver.  The railroad also shipped limestone for the furnaces from quarries along the line (one of which it owned), and coal,[probably to fuel the stationary steam engines at the mines.

In 1890, The Reading RR acquired controlling interest in the C&FRR, gaining access to the iron and coal trade on the Lehigh.
In late 1893, as the iron industry struggled, the Crane banked its last operating furnace and went into receivership, and the strike of the LVRR continued, the Crane Iron Co became part of the Empire Steel & Iron Co.
In 1909, the Empire Steel & Iron Company, now headquartered in Catasauqua, created an eastern rail connection from the plant to the east of town to provide access to lands for a new cinder dump on the Kurtz farm property and provide shipment connections for the Davies and Thomas Company and Crystal Ice Company.  To cross town, a tunnel was built beneath the town.   In 1910, the Crane found  it difficult to obtain fair rail tariffs with both the LV and CNJ RRs, so it entered into an agreement with the Lackawanna who had just finished laying a line into Bath, allowing them to use the Crane Iron RR to cross the river.   Meanwhile the Lehigh and New England was also expanding its lines from the anthracite fields and cement industry to Boston.  In 1914 Peckitt sold the Crane Iron Company’s railroad to the Lehigh & New England RR company,  giving this line the ability to run coal entirely over its own lines and connect to the LVRR, the CRJ, and the C&FRR.