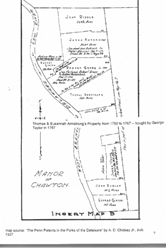 The 1700s was the transition period between the Native Americans and the European colonists. What became Biery’s Port, now the location of the Race St Bridge, was earlier a shallow crossing point on the Lehigh River used by the Native Americans. While there is no evidence of an Indian settlement within the boundaries of Catasauqua, there are definite remains of a substantial Indian burial ground along the river; Indian settlements were in the Weaversville area. At least locally, the Scots Irish appeared to take lands that were already cleared and settled by local Indian tribes. The German settlers were more inclined to clear their own lands and live in peace with the local tribes.

The lands were part of Penn’s colony, Bucks County. They were further claimed by the Penn family from the local Indians via the Walking Purchase (1737). When the first Scots Irish came c.1730 led by Thomas Craig, the center of their settlement was east of the crossing, centered on present day Weaversville. It was noted that the lands between there and the river were “thirsty grounds” and did not appear to be suited for farming as the lands were devoid of vegetation. However by 1760, one member of the Craig Settlement claimed land on the east bank fo the Lehigh just below the crossing as his farmstead. Even before that, the settlement had built a mill that was fed by what is now known as Catasauqua Creek at the point where it enters the Lehigh.” Gerrmans from the Palinate region were soon to follow, taking over farms abandoned by the Scots Irish (as the Scots Irish moved further west) and carving out new farms in the lands known at that time as Chawton Manor. Title to Chawton Manon was held by John Page, Esq. of England. He acquired the lands from a creditor of the Penn family who recieved the lands in settlement of a debt incurred by William Penn’s father. William Allen held lands just south of here along the Lehigh and acted as the land agent for those who wanted to settle here.

In 1752, the area became part of the newly formed Northampton County, whose county seat was established in Easton. Allen Township was esablished at the same time. The southern portion of Allen Township split off as Hanover township in 1798. When Lehigh County was formed in 1812, Hanover was split into two sections, the northern third stayed with Northampton County, while the southern two-thirds, containing Biery’s Port went with Lehigh County.

Aside from Biery’s Port, Hanover Township was settled later than most of the other townships of the region during the 18th century because approximately 23,000 acres contained within its area belonged in the “Manor of Fermor” which was privately owned by the Penn family and not officially open to settlement. In 1795, the proprietaries brought ejectment suits against the squatters to the U.S. Circuit Court at Philadelphia. Settlement of the suits was made out of Court and the land was sold to the settlers at a cost of $1.75 per acre. The land was re-surveyed and then divided into 196 tracts. Another reason why the township was not extensively developed immediately was the popular misconception that its soils were not good because of an inadequate water supply. (See “thirsty grounds” reference above). This misconception prevailed until the 19th century when the soils were discovered to be quite fertile. Agriculture then developed as a major industry in the Township.

For a brief history of the early years of Allen Township, see their web page.

For a history of Hanover Township, LeCo, see their web page.