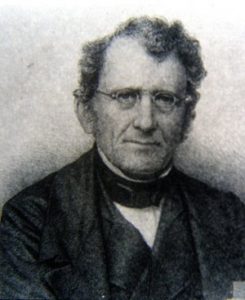 When David Thomas arrived in Catasauqua in July 1839, he immediately began the erection of the first furnace. One year later on July 4, 1840 the first blast of pig iron was produced from the furnace in Catasauqua. This single achievement signaled the beginning of the American industrial revolution. It was the first time the early anthracite furnaces were completely successful both from an engineering and commercial standpoint. This hot blast technology is still in use today as the first step in creating steel, though coke from bituminous coal has replaced anthracite as fuel.  See PA History for the historical context of the Crane Iron Works in PA iron history.  This review in Engineering Magazine, 1912, Vol 43, page 864 gives a technical overview of the evolution of the iron furnaces of the time.

Eight furnaces were eventually built at the Lehigh Crane Iron Works, including two built in 1919-1920. The company operated for 90 years. The company closed in 1925-1926, losing out to companies with the capitalization needed to move into steel and the ability to weather the post WWI recession. The canal remained the principal means of transporting coal, iron ore and limestone to the iron mills until 1868 when the LC&N completed the Lehigh and Susquehanna Railroad to Catasauqua. However the canal continued to operate until 1942. The furnaces converted from water power to steam when the third furnace was built. 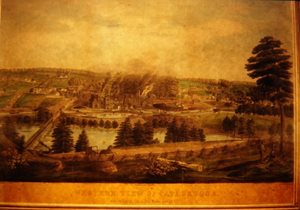 is considered the “Father of the American Anthracite Industry”. Thomas was also known as the Father of Catasauqua. He brought with him the English concept of the company town: laborers owed the company loyalty and for this loyalty the company would provide houses, schools, churches and all municipal functions. He laid out streets and built the first Company homes along Wood and Church Streets.The homes were two story brick and frame structures with slate roofs, consisting of four rooms. He laid the first water mains and organized the first fire company. He donated the land upon which the Presbyterian Church was built.

At his behest the new Borough was incorporated as Catasauqua on February 1, 1853, named after the creek that ran through the area and a Lenni Lenape word meaning dry ground or the earth is thirsty. Having invited to America others from Wales who were knowledgeable in furnace construction and operation, the stretch of company homes became a Welsh enclave surrounded by German farms.

Originally living at the corner of Front and Church, Thomas built a large home in 1856 which still stands on the southeast corner of Second and Pine Streets. The Thomas family is buried in the underground vault in Fairview Cemetery.

The industrialists who joined him, followed his lead in the construction of schools, churches, institutions, neighborhoods and businesses that served the residents of this and surrounding communities  Among the first settlers after the establishment of the iron-works were the Williams family, the Fullers, James Lackey, Samuel Glace, Joshua Hunt, Joseph Laubach, Peter Laux, Charles G. Schneller, and Nathan Fegley (Reference).  A walking tour of the borough of the early industries contains locations, histories and bios of those involved and is available on this website.

A recent summary of the early Catasauqua industries, associated industrialists, and their families can be found in the document, A History of the Iron Industry and Allied Businesses of The Iron Borough, Catasauqua, Pa, written in 1993 by the late Dale Wint.