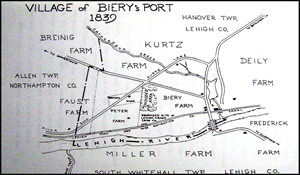 In the early 1800’s, after many of the Scots Irish moved west, the land that was to become Catasauqua was settled by German farmers, notably the Biery, Peters, Faust, Breisch, and Kurtz families. The Kurtz family holdings lay east of the road to Howertown; the others were on the west side of Howertown Road, between there and the river. A history of these early farms was written in an 1884 history of Lehigh County by Matt Hungerford, some of which was documented by W. C. Glace of Catasauqua.

The sketch of Biery’s Port dated 1839 was a recent drawing created by historian Dale Wint to show the status of the village at the time the Crane Iron Works was planned.