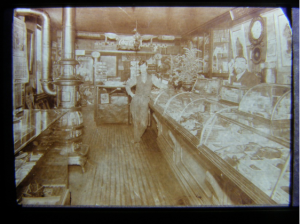 The Lehigh Crane Iron Works was built on the eastern bank of the canal, and its office building and superintendents’ home built along the road leading from Beiry’s Port to the Faust farm, which would become Front St. Front St was laid out in 1841 to make travel easier to and from the iron works. It was initially graded with cinders. Development moved north of Biery’s Port.

Businesses sprang up all along Front St, with storefronts on the first floor and residences above. In addition, there were some large residences built along Front St. The rail system, built to serve the iron works, grew, many foundries, forges and sheet iron and wire mills were started which shaped pig iron from the Crane into materials to build boilers, more furnaces, foundries and forges, to build rail systems, piping & fittings, horseshoes, and later automobile parts and rail and road tunnels rings. There was a large lumber industry with its roots in the canal trade. Two coal yards located along the canal. Plants were built to make brick to line furnaces, electric and telephone systems were created and expanded, and the silk industry came to town – all of which brought jobs and more retail to the bustling community. The streets and alleys along Front St were developed, adding breweries. At one time, there was an elevated railway that ran along Front St linking the industries on the upper and lower ends of Front.

Around 1900, the commercial center of the borough shifted to Bridge St. The National Bank of Catasauqua, the Post Office, Beidel’s Jewelry, and others relocated there. The town continued expanding to the east, with residential lots laid out on the Kurtz farm, and to the north into Northampton County. In the early 1900’s the town was at the peak of its economic development.

After the Crane and many of the other early iron industries closed in the 1920s, the town matured. The merchant class, surrounding farms, light manufacturing, recreational opportunities, and residual wealth from the boom years made the town a very pleasant place for children to grow up. Everything people needed and wanted was available in Catasauqua, often within a few blocks of home or delivered right to your door. Bartering services for goods was common practice allowing people to get by through the ups and downs of the economy. People walked everywhere and knew everyone.

Use the menu on the left to navigate to the different blocks of Front street.