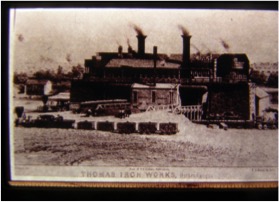 Taken from the Hopkin Thomas Project website, and originally the Lambert and Rienhart history, the Thomas Iron Co had its origins in 1854. Eighteen interested people attended an initial meeting called to discuss plans for the organization of an Iron Company. This meeting was held February 14, 1854, at Mrs. White’s tavern on Centre Square, Easton, Pa. (The building was later used by the United States Government as the Post Office of the city of Easton.) A resolution was adopted calling the Company “The Thomas Iron Company” in honor of David Thomas who projected it, and in recognition of his work as pioneer in the successful manufacture of iron by the use of anthracite coal.

The capital stock was fixed at two hundred thousand ($200,000) dollars, steps taken to procure a charter and a committee appointed to select and purchase a site for the works. David Thomas was authorized to purchase the Thomas Butz farm situated on the west bank of the Lehigh River, about a mile above Catasauqua, as the most eligible site for the works. The farm contained 185 acres 90 perches and the price paid for it was $37,112.50. The deed passed July 7, 1854.

The Board of Managers resolved, March 14, 1.854, to construct two blast furnaces, known as Nos. I and 2. Contract for the mason work was given May 10th to Samuel McHose of Allentown, Pa. Samuel Kinsey was employed as the first bookkeeper and his services continued for twenty-four years.

A contract for the first two boilers was made April 7, 1854, at a cost of $9,353 on the wharf at Brooklyn; and for two beam blowing engines on boat at Cold Springs, N. Y., at $42,600. The engines had steam cylinders of 56 inches diameter, and blowing cylinders of 84 inches diameter by nine feet stroke.

At a meeting of the Board of Directors, June 8, 1854, the name of the place of the furnaces was selected and adopted. The suggestion had been made to call it Coplay-the town above it being called “Schriber’s” at this time. But after some discussion the suggestion of Hokendauqua, by David Thomas, was adopted.

“Hokendauqua derives its name from a small creek which empties into the Lehigh on the eastern side, about half a mile above the village. It is an Indian word, ‘Hockin’ in the Delaware Indian language signifying ‘Landing.’ The name, in fact, was not given to a, stream of water, but was an exclamation used by the Indians at the time the first Irish settlers located there in 1730. It was probably made use of in speaking to the surveyors; a large portion of the streams were named in this manner by the surveyors.” (See Henry’s “History of the Lehigh Valley,” page 300.)

On November 9, 1854, the town was laid out, and the streets named. Homes were built in 1868 for the General Superintendent, the Superintendent and other members of the staff. Rows of brick houses were also erected for the employees of the Company. The town has been supplied with spring water, pumped from a spring on the river bank, since 1855. The Company also donated land for a school house and for the Presbyterian Church. 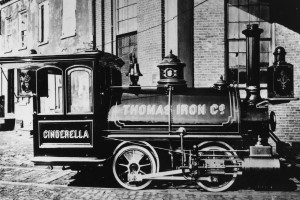 Meanwhile, Lock Ridge Furnace was built beginning in 1867. These furnaces, designated No. 7 & 8, went into blast in 1868-9. The Keystone furnace in Glendon (No. 9) and the Saucon Iron Company in Hellertown (Furnaces 10 & 11) were both purchased in 1884. The Thomas Iron Co. also operated the Lucy Furnace at Glendon. Pictured is a brand new Cinderella Narrow Gauge Locomotive ready for delivery to Thomas Iron Company. built by the Baldwin Locomotive works of Philadelphia in 1869.

Following a similar history as the Crane Iron, the Thomas Company sold off in 1922 with furnaces 1&2, newly updated, still in operation. The Keystone furnaces were sold in 1917. The Saucon Furnaces in Hellertown and the Lock Ridge furnaces were shutdown in 1921, both dismantled for scrap.

Other Site History:
Land purchased by Thomas for the Hokendauqua plant was previously the Butz farm.