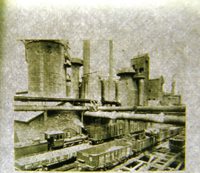 One of the major outcomes of the expanding iron industry was the construction of iron rails and the development of the railroad industry. The Crane built a rail system on the site of the iron works in the late 1840s to transport iron ore, limestone, coal and slag to and from the furnaces. A locomotive house was built at the SW corner of Front and Bridge for the maintenance of their engines.   This building, now 440 Bridge St, was expanded on the north end between 1908 & 1913.   It is soon to be demolished to make way for the extension of Bridge St onto the IronWorks site. 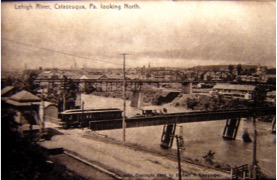 Lehigh Valley,*founded by Asa Packer, which brought coal from the north and iron ore from NJ. By the 1840s it was becoming evident that canaling would not meet fully the needs of the northeastern Pennsylvania anthracite fields. In 1846, the Delaware, Lehigh, Schuylkill, & Susquehanna Railroad was established. The name was changed to the Lehigh Valley Railroad in 1853.  Tracks for the Lehigh Valley Railroad through Catasauqua were completed in the fall of 1855 and were located on the west bank of the Lehigh River. With its arrival, the Lehigh Crane Iron Works became less dependent on the canal as a means of procuring raw materials for their furnaces, and industry expanded rapidly. By 1860, the town had 400 dwellings and a population of nearly 3000.  The Crane built a bridge across the river to connect with the LVRR.

The next railroad to arrive was the Catasauqua and Fogelsville RR. The Lehigh Crane Iron Company, assisted by the Thomas Iron Company, sought a charter from the state for a railroad from Catasauqua to Fogelsville. After prolonged efforts by James W. Fuller I, the railroad charter was secured and construction on the Catasauqua & Fogelsville Railroad began in the spring of 1856 with the formal opening of this line during the summer of 1857. The officers of the Catasauqua and Foglesville Railroad were David Thomas, President; John Thomas, Superintendent; Joshua Hunt, Secretary; John Williams, Treasurer. The station was located on the west side of the river, directly across the tracks from the LV RR. (See post card view). The line reached Trexlertown in 1860 and Alburtis in 1864, connecting with the East Penn RR. Passenger traffic was established by Charles Chapman, sup’t and engineer of the C&F RR, in 1875. The 1907 picture to the right shows the original station being replaced with a newer structure. 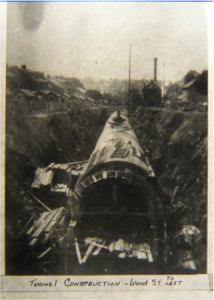 In 1868, The Lehigh Coal and Navigation Co completed a line linking the Wyoming Valley along the Susquehanna and Easton, which they leased to the Central New Jersey Railroad CNJ. This line passed through Catasauqua on the east bank of the Lehigh River. The CNJ  carried anthracite. There were numerous freight offices in the borough that shipped across both the CNJ and LVRR lines. The Central RR of New Jersey built a two story office buiding along the tracks on the south side of Race St, which later became the home of an unsuccessful silk mill and then the Smith Candy Company. Both rail lines also had picturesque depots as shown in the post card, Lehigh River, Catasauqua, PA Looking North.

In 1882, the Thomas Iron Company secured complete ownership of the Ironton RR, which hauled ore, coal, limestone and iron for the plant in Hokendauqua. Two spurs were created: one linking to the Crystal Ice Company and one to the Davies and Thomas Foundry, providing both with access to the Lehigh and Philadelphia Railroad connection by the Crane. This track never was extended further east or north.

In 1909, the Empire Steel & Iron Company created an eastern rail connection from the plant to the east of town to provide access to lands for a new proposed cinder dump. It would also provide a possible link to the LC&N railroad expansion in that area (the link along the river was damaged during a flood

and could not be rebuilt) and provide a shipment connection for the Davies and Thomas Company. To cross town, a tunnel was built between Front St, underneath the company homes along Wood St, to American St, where there was a once a quarry and municipal dump. The line extended from there, across Catasauqua Creek, and onto a 24 acre site (Kurtz Valley) that would become known as the Cinder Tip

The company which built and controls this great railway, was first incorporated, by Act of Assembly, April 21st, 1846, as &quot;The Delaware, Lehigh, Schuylkill and Susquehanna Railroad Company,&quot; which was changed to the present title of the company, by a supplemental Act passed January 7th, 1853.

The original main lines-Mauch Chunk to South Easton, forty-six miles,waslocated in 1851. The work of construction was commenced November 27th, ofthe same year and the road was so far completed in the summer of 1855, that on the eleventh of June, trains commenced running between South Easton and Allentown, though the heavy rock-cut, just below the former place, had not then been completed, nor was the road delivered by the contractor (Hon. Asa Packer), to the company, until the twenty-fourth of the following September. From that time, through trains ran regularly, and the first railway station of South Bethlehem was a brick dwelling house which had been built on the Luckenbach farm in 1849.

An address given by Felix F. Gerard of The Newcomen Society of England, American Branch (NY) on the LVRR’s 100 year anniversary can be found here. This speech was presented at the Saucon Valley Coubtry Club near Bethlehem in 1946.