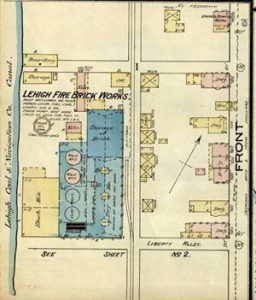 Until 1854, all the refractory needed to line the furnaces and stoves of the local iron furnaces were imported from Europe of elsewhere in the US. In 1854, Samuel McHose, the mason who supervised the construction of nearly all the early furnaces throughout the valley, and Oliver A. Ritter established a fire-brick factory at the foot of Gordon St in Allentown. In 1868, these two men joined with David Thomas in starting the Lehigh Fire Brick Works in a frame building located at the northwest corner of Spring and Brick Streets. The invoice below of fire brick purchased by the Crane to reline funaces is from 1870, This plant was destroyed by fire in 1872 and replaced by a two story stone structure with five kilns of large capacity. The fire bricks were produced in every shape and size—for furnaces, ovens, arches, linings, fams, boshes, cupolas, etc.—and were made from Woodbridge (NJ) clay. 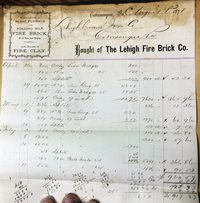 David Thomas acquired total control of the business in 1873 and was joined by his sons, Samuel and John, and son-in-law Joshua Hunt. When Thomas died in 1883, Joshua Hunt took over as Chairman. The business then employed 48 people and produced about 2.5 million brick annually. Upon his death in 1886, his son, David Hunt, who had been working at the plant since 1879, became supervisor. In 1885, Lucius H. McHose, son of Samuel McHose, came to Catasauqua as foreman of the plant. In 1892, he and David Hunt leased the plant and continued to manufacture fire brick. When David Hunt passed away in 1898, the firm was reincorporated and Joshua Hunt became manager. In 1900, Charles Corwin became manager of the plant in 1900 after Joshua Hunt resigned (to accept a position in Montery, Mexico?). The Sanborn map section is from 1885.

Lucius McHose became president in 1911. At that time two kilns were still operating, with an annual production of 1.5 million fire brick. By that time, D. George Dery was in town and was on the Board of Directors.

By the early 1920s, the local iron furnaces were being shut down and the fire brick works followed. The building was removed.

Graver Tank and Manufacturing Co of Chicago, which fabricated and erected tanks for storing petroleum products, established an Eastern Division here in Catasauqua, taking over the site of the fire brick works in 1933. They furnished 550 to 6 million gallon tanks, sending field erection and welding crews all over the east coast. They employed about 130 people under the supervision of F. H. Burchfield. They filed several patent applications in the late 1930s through the 1940s for floating roof tanks with vapor recovery for light oil storage. In 1956, they closed the Catasauqua Plant and moved operations to Edgemoor, DE.

Other Site History:
Bogh Brothers carried on a boat yard on this site between 1845 and 1865 to manufacture and repair canal boats. There was a second boat yard along the canal in the borough below below the Catasauqua House (Willow St).