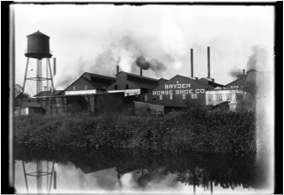 Many manufacturing firms in Catasauqua were inter-related through family and marriage alliances. The Bryden was a good example. Oliver Williams was one of the organizers of the Bryden in 1882. Willliams grew up in Catasauqua, moved away in 1853, eventually becoming involved in the leather business in the Chicago, then moved back in 1879 at the request of David Thomas to head up the Catasauqua Manufacturing Co. (CMC), a position he then held for 25 years. Williams sought other uses/markets for the bar iron from CMC’s rolling mill. He obtained the patent rights from George Bryden of Connecticut for making a complete shoe through hammering; whereas all other machine-made shoes were then rolled and the heels and toe-caulks were welded on. 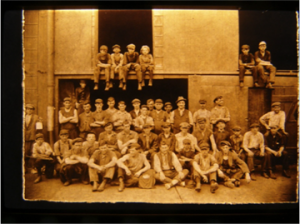 The initial horse shoe plant was a one-story brick building on the opposite side of Front, the NE corner of Railroad and Strawberry, adjacent to the Union Foundry, of which Williams was also part owner. With 30 employees operating two forge hammers, they produced 2.5-3 tons of horseshoes daily. In 1884 Williams took over as president and expanded the business in 1888, acquiring land along the river, straddling Catasauqua and what would become North Catasauqua. He brought Jacob Roberts from the Bryden Horse Shoe Co in Poughkeepsie, to equip the expanded plant. Roberts was superintendent until his death in 1905, at which time he was succeeded by his son, William, and later Paul Miller. Roberts lived on Third St, between Bridge and Pine.

Always alert to promising talent, Williams noticed a young, ambitious Englishman, George E. Holten who was employed as an inspector testing tunnel segments cast by the Davies and Thomas Company (Race St) for the Hoboken Tunnel. Williams hired his as a traveling salesman for the Bryden. One of the orders he brought in was for horse and mule horseshoes for the British Government during the Boer War (1899-1910), making the Bryden one of the largest industrial employers in the Lehigh Valley. George Holten had the good fortune to marry the bosses’daughter, Jessica Williams. 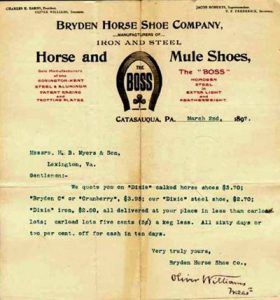 Upon Oliver William’s death, ownership of the Bryden passed to his daughters, Grace Kohler, Winifred Emanuel and Jessica Holten. George Holten assumed the duties as president, Tilghman Frederick (see Biery’s Port) became secretary (until his death) in 1909, at which time Holten’s brother H. Morley Holten was appointed (326 Bridge St.). Jessica took over when her husband George died in 1913.; Paul E. Miller became general manager. The plant continued to grow, and by 1914. occupied 7 acres, employed 300 men and produced daily between 40-50 tones of horseshoes, making it one of the largest plants of its kind in the world. In 1917, the company was sold to Never Slip of Brunswick, NJ and the two companiies merged to become Bryden Never Sjip Co. The horseshoe market declined as cars replaced horse-drawn vehicles, however the Phoenix horseshoe Co of Poughkeepsie acquired the Bryden in 1939, along with other competitors, and modernized the facility in Catasauqua to move from horseshoes to forgings and flanges, becoming the Phoenix’s forge division, and supplying materials to the war effort. 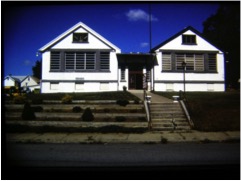 Over the next 25 years, the local Phoenix plant experienced several ownership changes: Union Car Co. in 1957 and the Trans Union Company in 1971, both of whom continued to make improvements at the Catasauqua plant. By 1953, the facility housed more than 21 board hammers, a complete die room, and a production machine shop. Two large 6-station, 5-die cold heading machines capable of forming parts from coil stock were installed. In 1977, a new modern metal building replaced the earlier wooden structure. The offices were relocated from the building on Chapel into the main manufacturing building, and the old office building sold.

In 1981, the Marmon Group of Chicago purchased Trans Union, and in 1985 sold the Phoenix plant in Catasauqua to Barco Industries of Reading. Today, the Phoenix Forge Group is made up of the following companies: Capitol Manufacturing Company, Phoenix Forging Company, Conduit Pipe Products Company, Phoenix Hotform Company, Barco Industries, and CapProducts of Canada. The Phoenix Forging Co. of Catasauqua continues to operate, manufacturing forged fittings for pressure vessels. In 2014, HCPA secured a state historic marker in recognition of the company’s role in the Boer War.

Site History
In 1795 John Philip Faust paid off his father Henry’s mortgage on the 193.5 acre farm and built a beautiful stone mansion on the site of today’s Phoenix Forge. His son Jonas inherited the farm, died a year later, passing on the family farm to his son, Paul. Unfortunately Paul, who was only 24 at the time, also inherited enormous responsibilities: the care of his great-grandmother Catherine who lived in a small house along the west side of Front St above Pine, his grandmother Barbara in lived in Stemton (later Northampton) and his mother Susannah, Jonas’s widow who later married Henry Breisch and lived at the farm house at the corner of what is now Third and Bridge.

In 1840, Paul Faust began selling off land to meet his obligations; the first recorded deed transfer was to Owen Rice. Other historically significant sales were to Catasauqua Manufacturing Co (1863), St. Lawrence Church (1860) and cemetery (1868), and the Fuller Grove Farm (1885), the later a 57 acre purchase by James W. Fuller, which marked the end of Faust ownership. In 1905, the Lackawanna Land Company, comprised of venture capitalists from the coal region and Philadelphia, purchased the Fuller Grove farm acreage; their sales office for lots was on the second floor of the POSofA building on Bridge St. After WWII, much of this land in still remained undeveloped; in 1940 a large section reverted to Northampton County for unpaid taxes. These lots were purchased by the Borough of North Catasauqua and are currently the site of the North Catasauqua Park and War Memorial. The Faust farm straddled what would become the dividing line between Lehigh and Northampton counties, the bulk lying within North Catasauqua (Northampton Co).