In 1914 when Catasauqua held its Old Home Week celebration, Bridge Street was the center of the business district. Today Bridge St between Front and Second St remains a commercial district in addition to being the home of Borough Hall, the police station and the post office. 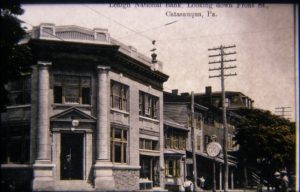 Address:     101 Bridge St – SE corner of Front & Bridge
Name:  Lehigh National Bank & Beidel’s Jewelry
Year built: 1909
Built by:  W. R. Glace
Lehigh National Bank, founded in Catasauqua, was Initially at 423 Front St in a building owned by W. R. Glace, then president of the bank, This parcel of land at the SE corner of Bridge and Front Sts was purchased in 1905 and the bank opened here 1910.  The bank operated here until 1950.  Architecturally, the building is colonial in design, the materials being Corning terra cotta with copper cornice and Wyoming blue stone trimmings.  When built, it was one of the finest bank buildings in Lehigh County and the tenth bank to be established in Lehigh County. 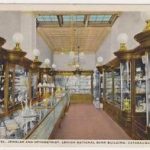 Beitel, who was President of the bank in 1910, moved his jewelry story to a space on the first floor of the bank on the Front Street side where it remained until 1951.  The Lehigh National Bank modernized in the early 1950s expanding into the space occupied by Beitels, then merged with the National Bank of Catasauqua in 1955.  A new clock was recently added to replace the one present many years ago.
In addition to the jewelers, other businesses had offices in the bank building over the years.  Dr. J. Edward Rehrig opened a dental practice here in 1909.  Dr. McKee had a dental practice here in 1920-1.  From 1919-1930, Clinton T. Snyder, Esq practiced law from an office in the bank building, before becoming solicitor and later tax collector.  After the bank ceased operation, the building was purchased by the Fuller Company, which used it for its engineering department.  In the 80’s, the building was bought and renovated into private offices on the first and second floors by the law firm of Weaver, Mosebach and Piosa. 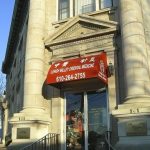 In 1991 it became the home and business of Dave and Ming-Ming Maloney who live on the second floor and operate LV Oriental Medicine Center on the first floor and Qi Spa in the adjacent space.
Before the bank was built here, the Swartz building was located here at the SE corner of Front & Bridge as the residence of James Swartz with offices on the second floor and storerooms on the third.  From 1889-1907 the post office operated out of the Swartz Building.  The Swartz Building, on the left in the photo, was razed to make room for the new bank in 1910.  The Swartz building was the home and office of James W. Swartz. 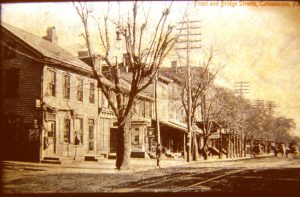 Swartz Family interlude:  The very early history of Catasauqua is peppered with the name of Swartz.  Glace who wrote the Reminiscences history was a descendent of the Swartz family:  his father Samuel Glace married Isabella Swartz, grand-daughter of Christian Swartz.  Christian, son of Nicholas Swartz of Longswamp, Berks County, married Catherine Heller and had a son John (born 1786).  The family came to the Irish Settlement and bought a farm from National Taylor along the river at Dry Run.  This was across the Lehigh, one mile north of Catasauqua, where Dry Run enters the Lehigh and by what became Swartz Dam.  John married twice, first to Sarah Mickley and had four children, one of whom was Isabelle and another, John, who operated a store in Catasauqua with his half brother James W. called J & J.W. Swartz Emporium.  John married a second time to Catherine Heller who and had 12 additional children; including Eliza who married Hon. Joseph Laubach.  John became the first photographer in Catasauqua, Owen started the lumber business on Front St (which later became Wint Lumber), James W. partnered with his half brother in the Emporium, and Benjamin Franklin who was a salesman for the McKee Fuller Co.   Owen Swartz married John Peter’s daughter, who owned the farm that was the site of this downtown area.

West Side of Front at Bridge St:  440 Front St
The Crane built a rail system on the site of the iron works in the late 1840s to transport iron ore, limestone, coal and slag to and from the furnaces. The red brick building here at 440 Front St was built as a locomotive house for the maintenance of their engines.  The building housed a roller skating rink in the 1930s.  The building had a wooden floor and you could book the rink for parties.  Bill Albert remembered not only skating here, but rollerskating to school at St Mary’s.  Even before the locomotive house was built, Isaac Chandler, brother-in-law of John Fritz and a partner in the Union Foundry on the corner of Front and Pine, set up a blacksmith shop here that would have been just NW of the locomotive house.. 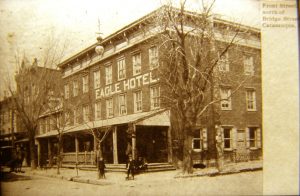 Address:  NE Corner of Front St at Bridge
Name:  Eagle Hotel/Mike’s Auto
Year built: 1850
Built by: Joseph Laubach
The Eagle Hotel was conveniently located near the train station(s).  It was run by members of the the Laubach family until 1886, when it was purchased by Oscar H.Harte.  Harte’s widow, Floranda, was the proprietess after her husband’s death in 1891.  She sold the hotel to Capt. W. H. Bartholomew, who sold it in 1906 to Edward L. Walker.   The Eagle had 36 rooms.  The Eagle Hotel and the Catasauqua House on Front St were the first two hotels in town to get liquor licenses. A livery stood behind the hotel along Railroad.  Immediately behind the hotel, facing Bridge, were a couple small buildings, one of which held a cigar dealer.  Henry Swartz, who started in the cigar business with his wife at 603 Front, was listed as a cigar dealer here (then 5 Bridge) in 1885, then moved to 603 Front by 1887.  Swartz died in 1896.
Two small dwellings next to the Eagle Hotel facing Bridge St were converted into the Adams Express Co in 1891.  The 1929/1930 directory lists 108 Bridge as the address for the American Railway Express, Carl S. Webber, agent.  The small bulding next to it, 110 Bridge, in 1908 was the office of Daniel Milson’s coal buisness: “Milson, Daniel, coal, wood, crushed stone, etc 110 Bridge” (from the 1908 direcory of the borough).

After the Eagle Hotel was torn down, 118 Bridge was built by GATX on the eastern part of the lot.  Borough Hall now occupies the first floor of 118 Bridge. Mike’s Auto is now on the SW corner of the lot.

On the north side of the lot, a grocery coop stood for a time with the Tyrol Gas Station on the corner.  Al Regits & Bill Albert both remember as kids getting orange crates from Pete Thomas who ran the fruit and vegetable market.  They would attach skate wheels and make a cart.  Al decorated his with bottle caps and rode it around town.

After the Eagle Hotel was torn down, the Fuller Company, then owned by GATX, built this office building, Fuller No 3, on the site facing Bridge Street.  The building currently serves as Borough Hall. 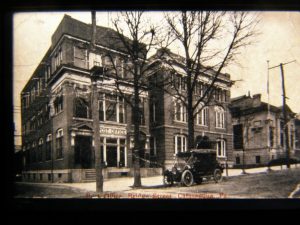 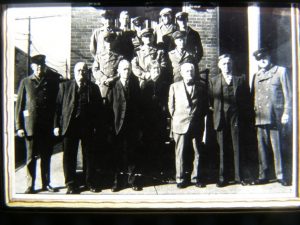 The photo shows 120-122 Bridge Street on the left.  The Initial occupants were the Post Office on first floor, after moving out of the Swartz building, Clear Springs Water Co & Catasauqua Telephone Co on the second floor and the Charotin Club on the third floor.  The picture is of PO employees gathered in front of the building.

Bell Telephone brought lines to Catasauqua in 1890. The numbers started at two digits, and by 1914 Bell had  operators and 231 patrons.  The Lehigh Phone Co arrived in 1900, with 5 operators and 176 patrons.  Lehigh was granted the franchise priveledge in exchange for proving free telephone service to the town hall/fire/police bulding on Church St and allowing the borough to string lines on their poles to carry fire alarms.

Col. James W. Fuller bought the building before his death in 1929 and the company occupied only a part of the buiding initially.  The Charotin Club left in 1929 and the second floor was vacated in 1931.  It became Fuller Comapny offices.in 1935, and remained as Fuller No. 2 until 1976.  It was torn down in the late 1970s.

.
Address:  124 Bridge St
Year built: 1900
Name:  Empire Steel Company Office/Fuller No 1
Built by: Leonard Peckitt
Shown in the above photo in the middle is 124 Bridge St.  When Peckitt consolidated the Crane Iron with several other furnaces under the name Empire Steel & Iron in 1899, he located the company’s headquarters in this building in 1900.  After Empire Steel and Iron was sold to Republic Steel in 1922, Col. James W. Fuller bought the building and it became the headquarters of the Fuller Company, incorporated in 1926, which provided equipment and services to the cement industry.  The building below it was purchased by the Fuller Company several years later adding office space for the expanding company.  A third office building was built at 118 Bridge St in the 1960s. 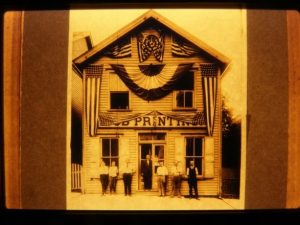 The Catasauqua Dispatch operated at 113 Bridge St for about 60 years, until moving in 1952 into the former Fuller Garage across from St Paul’s on Howertown Road.  In 1885, the Dispatch expanded from four pages to eight pages, allowing for more advertisements.  After Randall retired in 1914, John S. Matchette became the editor and proprietor, followed by R. H. Steinmetz.  Steinmetz moved the business to Howertown Road in 1952. 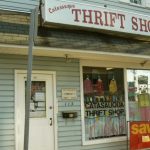 Mark Bros Electrical and Home Appliance opened at 118 Pine St in the 1940’s, then moved to 113 Bridge in 1953.  Henry J. Mark previously worked for the Bryden Hoseshoe and PPL in sales.  His brother Vincent served in WWII, participating in seven major campaigns in the African-European war area.  Hontz Appliances moved in after Mark’s at 113 Bridge.

Address:  115, 115 1/5 & 117 Bridge St
Once the site of a livery, this office building opened in July 1896.  The first tenants were the Catasauqua Electric Light and Power Co,, W. M. Morrison, electrical contractor, and  Schick & Hausman plumbers.  The picture of the needle kit advertising Milson’s Coal puts this business office (coal yard was next to the mill on Lehigh St) at 117 Bridge; the 1908 directory puts the Milson business at 110 Bridge. 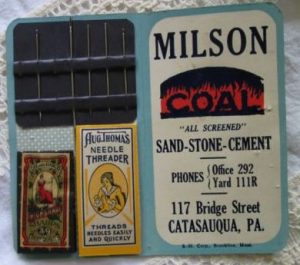 The W. I. Litzenberger ad came from a 1918 CHS Brown & White. From 1912 to 1923. the borough directories list 115-117 Bridge as the business address of Keys Bros & Co, manufacturers of clinical thermometers.  In 1928-30, Mary Panchison operated the Blue Bell Beauty Shop here.  The local American Red Cross office was here circa 1930.  Lawerence O. Klingler opened his radio and TV service business, Klingler’s Radio, Sound and TV Service, here in the 40s and 50s..

In the 50’s, there was a two chair barber shop here operated by Carl Giering.  The second chair was manned by Andrew Skripek – he later moved it to the Old Dutch Brewery.   Carl’s father, Oliver H. Giering, operated a barber shop at 509 Second St.  Carl also operated the William Roxberry shop at 527 Front St.

The Catasauqua News Agency was here in the 1960s, run by Catherine Christ.