Second Street between Pine and Bridge

See Pine St for information on the David Thomas Mansion. 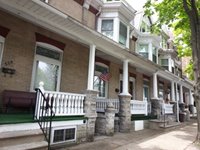 Schneller Row Homes – west side of Second below Pine
This row of homes was built by Charles W. Schneller in 1909.  He ran a tin/hardware business on Front, built the Schneller Block on Front and Strawberry, and lived on Walnut Street above Third.  He died in 1909, and the row of homes passed onto his son, Dr. John Schneller.
Before Schneller:  The earliest map of the borough shows one home on this block between Strawberry and Pine:  the home of William Michel, who was listed as a coachmaker in the 1877 directory, living on Second near Bridge.  Wm Michel, along with David Thomas, bought the Union Foundry, (backed up to this lot) from John Fritz and his bros–in-law in 1850.  Michel sold his ownership share in 1869.  The home was still here in 1900, when the funeral service for Michel’s mother-in-law, Mrs. Mary Richards, was held here.

524 Second was the home of William Wentz, proprietor of the Majestic Theater, his wife Annie, Melvin E. Wentz who ran Mels Restaurant and Pool Room (625 Front), Noel S Wentz (manager of the Majestic) and Adrin D. Wentz (clerk) as per the 1929/1930 directory.

The Wolbachs lived here during the 40s until 1949, when they built a new home at 337 Bridge.  Harold Wolbach worked for the Fuller Co from 1926 until his retirement in 1970.  He was secretary of the Fuller Co in 1949.  See 329 Bridge for more on the Wolbachs.  William Colin Armstrong, his wife Madalene and atwo sons, William and James lived here at the time of Mr Armstrong’s unexpected death in 1951 at age 51.  Mr Armstrong was an electrical engineer in the drafting department at Fuller Co and an organizer of the school PTA.

528 Second St was the office of Gillespie Insurance beginning in 1928, run by Harold and Irene Gillespie.  In 1948 they purchased the fire insurance business run by Grant Sheckler.  Mr. Gillespie served as president of the Lehigh Association of Insurance Agents in the early 50’s.
In 1928, 530 Second was the home of Thomas H and Edith Curtis, and their two children Hilda (steno) and Luther (student).  In 1926, they lived at 418 Bridge, in 1925 at 29 Second, and from 1918 to 1924 at 409 Howertown Rd.  Previously of Wilkes Barre, Curtis was a car inspector for the Jersey Central before being promoted in 1917 to general foreman of the Jersey Central at Siegfried, Northampton, and Catasauqua.

532 Second:  Dr Schneller lived in 532 Second before moving his residence and office around the corner to 119 Pine St in 1917.
William McBride, a partner in McBride Bros Silk in Fullerton and treasurer of the Borough of Catasauqua moved into 532 in 1917.   Samuel Kleppinger, associated with a fire brick and clay works at Wood and American and a brother of Wilmer Kleppinger who ran the electric store on the 400 block of Front St, moved into 532 Second for a short time after his mother’s death circa 1920.

Address: 534 Second St
Year Built:  1940
Built in 1940 by the Catherine Schneller, the widow of Dr J. S. Schneller.  Dr. Schneller was one of two sons of Charles W. Schneller who ran the hardware store in the “Schneller Block” at Front & Strawberry.  Catherine lived here at the end of the block of row houses built in 1909.  She replaced the end-of-the-row home with this newer home in 1940 and sold off the rest of the row.

More recent residents included Bob Mushrush, basketball & football coach at CHS from 1946-1966 and a member of the Lehigh Valley Basketball Hall of Fame and the Catasauqua High School Sports Hall of Fame.  His teams won ten Lehigh Valley League championships, including seven in a row from 1960-1966, featuring centers Rich “Tiny” Saylor, Larry Miller, and Tom Superka. His teams also won three District 11 championships. He retired from coaching at Catasauqua after the 1966 season and passed away in 2012.  Another coach who lived in the row was Robert G. Deibert (passed away in 2017 at the age of 91).  He was the husband of the late Helen (Kappes) Deibert and celebrated 63 years of marriage together before her passing in 2010. Born in Catasauqua, Robert was a graduate of Catasauqua High School and East Stroudsburg University. He served in the Pacific Campaign in the Army during WWII. He was a longtime member of the Presbyterian Church of Catasauqua. Robert was a teacher for the Catasauqua Area School District for many years. He was inducted in the CHS Hall of Fame for his accomplishments as a Basketball Coach and was involved in many stages of athletics in the school district.  He was very well loved by his students. 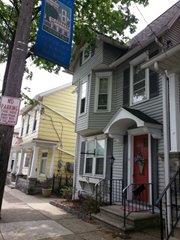 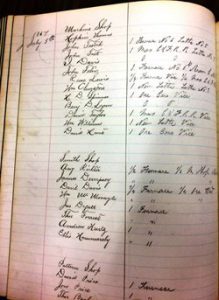 The was originally the home of the Dyatt family. James Dyatt was a blacksmith for the Crane (see 1867 Crane craft log, smith shop) and later for the Union Foundry. He was a member of the George W Fuller Post #378 of the G. A. R. having served in the war while a resident of NY. He came to Catasauqua in 1865 where he married Margaret McAllister. In 1910, James became Health Officer for the borough, and died in 1913 at age 73. His widow and daughter Emma, a stenographer, were still here when Margaret died in 1918, at age 72. Emma remained here until her death in 1933. Emma’s brother William settled in Hazleton and died in 1934, at which time he was manager of PPL’s Hazelton division. The Dyatt family lived on 3rd St above Walnut in the late 1800s before moving here.
A more recent resident was Dr. Hauck.

The 1908 directory lists this as the home of John J. Williams, agent of the C&FRR, his wife Mary, and his father,
David R. Williams, yeoman. John J. was the only son of David R and Elizabeth James Williams.  .David R Williams came to this country from Wales in 1864 at the age of 21 and became a locomotive engineer for the C&FRR, later to become the Philadelphia & Reading RR.  His wife died in 1900 and he died in 1912.  They do not appear to have been related to the other Williams family in town.   The 1930 directory lists the Seibert family living here:  Percival T Seibert was a supervisor at the Wahnetah, his wife Lovina E, Loraine a teacher, and Sylvia and Lucille, both students.  The Seibert family grew up at 204 Front.  Mrs Asalena Seibert passed away there in 1907.  Percival’s brother Milton and his wife Cora lived at 738 Third.

Other Site History:
520 Second  was built about the same time as the Joshua Hunt home that occupied the block between  Strawberry & Bridge Sts along Second; the Hunt home was razed to make room for the bank.  Joshua Hunt was the son-in-law of David Thomas.  520 Second St, the lot and home, then were owned by Mrs. L. Richard (history unknown).  Hunt had a ‘hot house’ on the opposite side of Strawberry St behind his house.  For more info on the Hunt home, see the business district section of Bridge St tour, bank building.

Address:  518 Second St
The 1912 directory of the borough identifies this as the home of Mary R. Swartz (widow of Henry G), Howard V. Swartz (assistant cashier) and Mame E. Swartz (bookkeeper).   A 1911 Dispatch notes that Mary E. Swartz of Second St resigned her position as bookkeeper for the F. Hersch Hardware to accept a position with the National Bank of Catasauqua.  It also noted that Miss Mabel I. Souders, formerly a clerk in Bowens store would succeed Miss Swartz at Hersh’s hardware.The 1930 CBD lists Howard Swartz as president of the National Bank of Catasauqua living here with his wife, Gertrude. 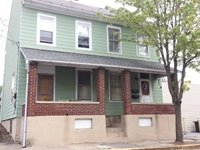 Address: 511-513 Second St
On the SE corner of Second and Strawberry stands this double home (pictured), at one time the home Edwin Bachman, and his wife Priscilla, and children. Edwin later in life became David Thomas’s driver, but started with a farm in Lehigh Township and 11 children. They moved to Catasauqua in 1882 and lived first at 33 Front St, then Race and Second, before moving to this corner of 2nd and Strawberry. Edwin was in the hauling and general contracting business in Catasauqua in addition to having a stone quarry and coal yard. At the time they lived here (1890), their next to the oldest child, William G., lived here with them while he apprenticed as a painter and paper hanger. They maintained a residence at the farm for while also. More information on the Bachman family can be found in History of Lehigh County, Pennsylvania, and a Genealogical and Biographical Record of Its Families, Volume 2, beginning on page 29.
Before the Bachman’s, Lucy and Matthew (moulder) Dougherty resided here along with Mary and Robert (machinist) Dougherty (1885 directory).

In 1908, Cornelius Roth, the photographer and Justice of the Peace, and his wife Cora lived at 511 Second, along with a daughter Tillie, clerk. His studio was around the corner on Bridge next to the Pennsylvania Hotel. After Cornelius died (between 1914 and 1916), his widow remained here into the 1920s; she is listed in the 1926 directory living on Mulberry St.