So why is there a Bridge Sreet, but no Bridge?

About 1845, the Lehigh Crane Iron Company felt the necessity of a separate bridge for its use. Iron ore beds were discovered at different places in South Whitehall Township, and the hauling ofz ore around by way of the Biery (now the Race St) Bridge came to be considered a serious item, with the enlarged toll bill from the bridge company.

The statute law of Pennsylvania, however, forbade the erection of a bridge so near an existing bridge. To circumvent this statute, the company purchased land on both sides of the river and thus were in a position to construct a private bridge for themselves. The Bridge was referred to in early deeds as the Catasauqua Bridge, distinct from Bierys Bridge. 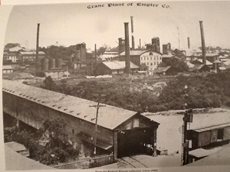 After its erection there were times when teams hauling the ore became so numerous that they extended in a continuous row from approximately where the entrance of Fairview Cemetery is now located, across the bridge to the plant offices on Front Street. A flood took out the first Bridge St bridge in 1862 and it was replaced with a covered bridge (seen in the picture).
The Crane allowed residents to use the bridge so they also could avoid the Biery Bridge toll. When another flood took out this bridge, it was rebuilt as an iron bridge. In 1904, the tracks were modified to allow for larger rail cars, and it could no longer be also used by the residents. This prompted the town to build a public bridge at Pine St, which formally opened in 1908.

In 1914 when Catasauqua held its Old Home Week celebration, Bridge Street was the center of the business district.

Today Bridge St between Front and Second St is a commercial district in addition to being the home of Borough Hall, the police station, and the post office. Bridge St is also the southern boundary of the Mansion Historic District which extends east to Howertown Road.