Owen Fatzinger was treasurer of Wint Lumber Co. The lumber business in Catasauqua at Front & Spring Sts started in 1853 and stayed mostly in the Wint-Fatzinger family after 1874, when F.W. Wint, Owen F. Fatzinger and J.P. Wint purchased the company.  F.W. died and was replaced by Rufus M.  The company converted to a stock corp in 1900 and Frank J. & Owen A. Fatzinger were added as shareholders. In 1902, Wint Lumber Co. was enlarged by the addition of the Catasauqua Rolling Mill property. A coal yard was also added to the business in the early 1900s. 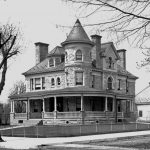 This later became the Markowitz home and is still owned by the family. The Markozitz’s owned and operated the local Orange Crush distributorship. The second and third floors were converted to apartments.

This lot on the north side of Bridge St was part of the earlier Fuller Homestead land purchase, a 50 acre tract that extended to Arch Street. The first Fuller home built in this neighborhood was on the north side of Bridge between Crane and Fourth St, where the 326 Bridge street home now stands. This was built by the first James Wheeler Fuller’s brother Clarence Dorrence Fuller C. 1871. It can be seen to the left of the Fatzinger Home in the photo. It was razed sometime between 1901 and 1908.  For more info on the Fuller Family, check out this web page. 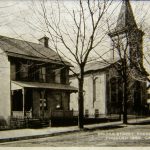 Above the Williams home (home pictures on the far right on the post card) on the south side of Bridge was the Bridge St Presbyterian Church. Rev Leslie Irwin of the Irish Settlement began preaching in Catasauqua in 1839  to the Scotch Irish Presbyterians working on the construction of the Crane Iron in 1839.  A congregation here formed in 1850.  Before this chruch was built in 1868, a smaller church stood further down the block on the east corner of Crane St (then names Church Alley).  The church shown in the pictures was active until 1937, at which time it merged with the Presbyterian Church at Second & Pine. The church was razed as was the house above it on Bridge St close to Howertown Road.

Above the parsonage (not visible in the picture) was a school on the SW corner of Howertown and Bridge. Built in 1849 as a private academy, and known as “The Academy”, it later became part of the public school system, and remained in use from 1866-1903 until the Lincoln School was built. James W. Fuller III purchased the land on which the school stood in the late 1890’s and built the stately mansion shown in the photo in 1904. James W. Fuller IV lived in this residence until moving to his farm (Rocky Hill Farm) in Allen Township and gifting the home to St Paul’s. 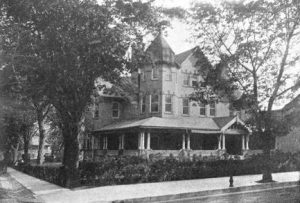 Previously part of the Peter Farm, on the west side of Howertown Road, at the corners of Fourth and Bridge stood, at one time, two large mansions owned by the Fuller family, in addition to the CD Fuller home below Fourth on Bridge.  The one shown on the right replaced the school,  parsonage and church. All three homes are gone, and the remaining descendants of the Fuller family in Catasauqua now live at Willow Brook Farms, north of the borough.

This home on the southwest cover of Bridge and Howertown was built by James W. Fuller, III.  Born in 1873, he worked in the family business, the Lehigh Car, Wheel, and Axle Works from the time he graduated from school, working his way up to being its President in 1913. He eventually sold off most of the company in 1926, keeping the patent for the Kinyon pump and forming the Fuller Co which focused on supplying machinery used in the cement and pulverized coal industries. He was also president of the Allentown Portland Cement Co and Valley Forge Cement Company. Like his father, he served as a director for many businesses. He married twice: James IV and a daughter Emily were born to Emily Meyers Fuller, daughter of George Henry Meyers of Bethlehem. CT Fuller (of Willow Brook Farms) was the child of his second marriage to Dorothy Mariee Stalcup of Newark, NJ and Denver, CO.  James III bought up many farrms, accumulating ~1300 acres in Allen and Hanover Twps and creating Willow Brook Farms. He died in 1929 of encephalitis, which he contracted while traveling home from Hawaii by ship . His widow remarried and passed away in 1953.

Their son, James W. Fuller IV, continued to live here in the family estate.  He married three times and carried on the family business.  He eventually sold the Fuller Co in 1954 and moved to Rocky Hill Farms in Allen Twsp. He donated the home to St. Paul’s in the 1960’s, who found it to be too large and costly to maintain as a rectory. The church razed the home, building a parking lot and new parsonage for the church.  All that remains is the Carriage House.  The Catasauqua Dispatch & Printery occupied the carriage house from 1952 until its demise in the 1990s and recently was converted into townhouses. James W. Fuller IV died in 1986.  For more info on the Fuller Family, check out this web page. 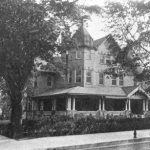 James Fuller III grew up in this family home on the north side of Bridge St . Built on a large lot bordered by Bridge St, Fourth St, Howertown Road and Strawberry,  This was the home of  James W. Fuller II and and his wife Kate Thomas Fuller (daughter of Hopkin Thomas), James W. II enlisted at age 18 in the 47th Regiment during the Civil War. He sold queens-ware in Philadelphia before returning to Catasauqua in 1868, joining up with his uncle, Charles D., and James Thomas in the McKee, Fuller Co, and as proprietors of the Lehigh Car, Wheel & Axle Co.  James W. II laid out the area across the river in 1870, where the business was located, as the town of Ferdale.  The town was renamed Fullerton in his honor in 1894.   He had a very hands-on role in the business of mixing iron for the casting of wheels and axles.  He also served as a president of the Catasauqua Manufacturing Co., VP of the Empire Steel and Iron Co, and was on the Board of Directors for many local companies including the Thomas Iron Co, Wahnetah Silk, Lehigh Valley Trust, Ironton Railroad, Catasauqua and Fogleville Railroad, and Lehigh Foundry. He also owned farms, raising Guernsey cattle

When their oldest daughter Maude married James Sketchley Elverson, the Fullers built them the elegant green stone home on the northern end of the lot, 533 Fourth St , along Strawberry St.

The Fullers were involved in many business and civic ventures.  James Wheeler Fuller came to Catasauqua in 1842, running boats on the canal, then took over the operation of the canal store at 2 Race.  His parents and younger brother followed him here.  He built two large homes on Front St:  one above Pine and one at School.  In 1854, Fuller obtained a charter for Crane Iron to build the C&F RR from the PA Legislature; he purchased the land to start Fairview cemetery in 1858.  He was influential in the political and military affairs of PA’s involvement in the Civil War, and became wealthy selling horses to the federal government during the war. (Link to Wint’s Fuller Family History) A beautiful tribute to the Fuller’s military service is given here.

James W. II enlisted at age 18 in the 47th Regiment during the Civil War.  He sold queens-ware in Philadelphia before returning to Catasauqua in 1868, joining up with his uncle, Charles D., and James Thomas in the McKee, Fuller Co, and as proprietors of the Lehigh Car, Wheel & Axle Co.   James W. II laid out the area around the business in 1870 and the town was named Fullerton in his honor.   He had a very hands-on role in the business of mixing irons for the casting of wheels and axles.  He also served as a president of the Catasauqua Manufacturing Co.

James W. Fuller III was known as Colonel Fuller.  He worked in the family business, becoming president of the Lehigh Car and Axle Co.  In 1926, he sold off the business to Babcock & Wilcox (boiler maker in Ohio) with the exception of the Kinyon pump patent, and formed the Fuller Co, manufacturer of Fuller-Kinyon pump systems .  He was president of the Portland Cement Co and the Valley Forge Cement Co until his death. He accumulated 1300 acres of land in Allen and Hanover Townships, buying up the farms of Emanuel, Gogle, Deily, Brenig, Holton and Schaden, which he named Willow Brook Farms.  There, he bred horses, maintained a herd of Guernsey cows, and along with Gen. Harry Trexler, bred and stocked Chinese Ringneck Pheasants in the area.  He was stricken with encephalitis while traveling and died at St Luke’s Hospital in 1929.

James W IV inherited his father’s wealth and 60% of the Fuller Co. where he served as president from 1939 until 1954 when it was sold to GATX. He was VP of Portland Cement, holding 40% of its stock till it was bought by National Gypsum in 1959.

The family was also involved in the scrap iron business, Globe Metal Works, and Fuller Oil & Supply.  They built bridges:  CD Fuller replaced the Crane Co Bridge after it had been swept away in the flood of 1862.  CD Fuller organized the Catasauqua Oil Co, and along with William R. Thomas, he setup the Lehigh Car, wheel & Axle Co.  The Front St block between Church and Bridge was referred to as the Fuller Block. 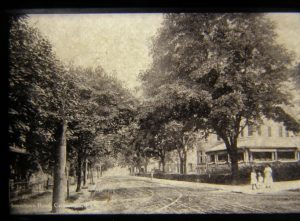 James Nevins was born in Ireland in 1826 and came to Mauch Chunk to wrought iron in 1842.  In 1847, he came to Catasauqua where he worked in the furnaces in Catasauqua for 42 years.  He married Mary Ann Liebert, PA German, in 1852.  His father was a linen weaver.  He attributed his “fine, comfortable home” to his wife.  He lived to be 86 years old.

Mary Ann’s father was John Leibert, who lived near Koehler’s Lock (No 37) and worked as boss carpenter for the Lehigh Coal & Navigation Co repairing canal boats, then for Biery’s Port as a mill-wright and miller, then was in charge of the water machinery at the Crane Iron.  When John died, his son Owen, 9 years old, had to go to work.  He went to the Crane Iron Works, and David Thomas became his legal guardian. The Thomas’s trained him as a blacksmith and he became foreman of the shop.  At 21 he went to work as a blacksmith, and later machinist, for the Bethlehem Iron Works.  He at one point became assistant engineer to John Fritz and, upon Fritz’s retirement in 1893, Liebert became general superintendent of the Bethlehem Iron Co. Owen built a mansion on Market Street in Bethlehem.

Other Site History:
The lot was part of the Kurtz farm, 186 acres which extended from Howertown Road east. The Kurtz family purchased the land in 1831 from Abraham and Elisabeth Ziegler, who acquired the land in 1807 through a Sheriff’s sale from Conrad and Hannah Haas. Kurtz sold off a lot to Nevins in 1871 upon which Nevins built his home.  After the death of his wife, the house passed to Emma Morrow (wife of James Morrow) and Margaret A. Liebert (wife of John Leibert).

Architectural Notes:
PA Vernicular/Late Federal style. 2-story wrap around bay and wrap-around porch, as well as the lintels over the windows and ornate brackets provide an Italianate ambiance. The original side porch was enclosed and opened up to become part of the living space. An original flue for a smoke room in the cellar, now serves the family room fireplace.