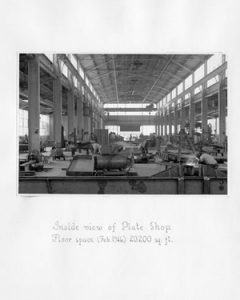 The iron works in Catasauqua closed following WWI. The property was purchased and redeveloped by the Fuller Company for manufacturing equipment for the nearby cement industry. Their offices were on Bridge Street. F. L. Smidth, which acquired the Fuller Company and property in 1990, discontinued manufacturing here in 2002, but still operates a research facility on the north side of the Pine St Bridge.

The Fuller Company was founded based on a patent by Kinyon of Allentown which defined a ‘pump’ for moving solids. Alonzo Kinyon got the inspiration for an enclosed pump at a plant in Ashtabula, Ohio, in 1919. Kinyon was looking for a better way to move pulverized coal, which was used as a fuel in boiler furnaces. Companies had used large fans to blow the dust through ducts, which created an explosion risk. Open conveyor belts were no better, since the dust they gave off could also spark an explosion. Kinyon found that dry, pulverized materials “assume a fluent, liquid-like condition when properly mixed with air.” Kinyon also found the mixed powder and air could be moved through a pipeline by a combination of two things: displacement pressure from new powder behind it, and the continuous turning of a large motor-driven screw fit into the pipe.

The pump would work wherever a pipeline could be run, and material could be dropped off at more than one point. Kinyon sold his concept to Fuller-Lehigh Co. of Catasauqua , which was also looking for ways to move coal powder. The first pump was made in 1923. Company owner James Fuller III kept the rights to the invention when he sold Fuller-Lehigh and founded a new company, Fuller Co., in 1926. The new pump became the company’s first flagship product. March 04, 2007 | By Kurt Blumenau Of The Morning Call

In 1929 Fuller Company acquired the Guarantee Construction Company of New York, the manufacturers of the “Airveyor,” a high velocity suspension-type pneumatic conveyor, and in 1931, Fuller Company purchased the rights to the French multi-vane rotary design compressor. The Breerwood process was marketed in 1934. This process allowed the manufacture of cement from inferior limestone and silicious material.

The rights for what became the Fuller-Fluxo System were acquired in 1935 from the F. L. Smidth Company. This system was used as a substitute for the Fuller-Kinyon system when conveying cement and abrasive materials over great distances.

The Fuller Company established a small machine shop in a portion of the Lynch and Dugan Garage, located at the southwest corner of Pine and Railroad Streets, in October 1936. The one-man shop was used for the company’s first in house production. In June of 1939, Fuller Company purchased ten acres along the west side of Front Street, at the site of the former Crane Iron Works, then owned by the Borough of Catasauqua. The research, machine, carpentry and electrical shops were set up in three buildings of the former Crane Iron Works.

In November 1939 the president’s position passed to James W. Fuller IV, with Alfred E. Douglass, Sr. becoming chairman of the Executive Committee. By 1945 the company’s demand for plate work was so great Fuller Company erected its own plate shop along Front Street, which had an original work force of twenty-two men. Business continued to increase and in 1946 Fuller Company purchased the Manheim plant. By 1951, after twenty-five years of existence, Fuller Company was a leading supplier of pneumatic conveying equipment to the cement industry. The company employed approximately 800 people and had annual sales of approximately $8,000,000. The firm had offices in Chicago, San Francisco and Los Angeles. 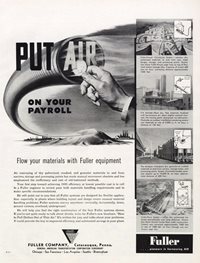 Alfred E. Douglass, Sr. was re-named president and he continued to serve in this capacity until January 1957. A new engineering building was erected at the corner of Front and Willow Streets, which enabled the consolidation of eight engineering groups. During this time Traylor Engineering and Manufacturing Company of Allentown was purchased by Fuller Company. With the retirement of Alfred E. Douglass, Sr. in 1957, Channing O. Davis was elected president of the firm.

In 1965, GATX built a two-story office building at 118 Bridge Street, naming it Building No. 3 and in 1966 Building No. 1 (Empire Steel and Iron Company) and No. 2 (old post office) were given facelifts to resemble the new structure.

With increasing demands for office space, Fuller Company headquarters were moved to new facilities in the Lehigh Valley Industrial Park I, Bethlehem, during 1976.

In 1986 a Fuller management group led by Fuller Company president Elmer D. Gates and a New York investor, Eli S. Jacobs, purchased Fuller Company from General American Transportation Corporation. After four years of operations, they sold the company in 1990 to the F. L. Smidth Company, then owned by FLS Industries A/S of Denmark.