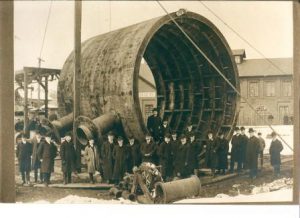 The Davies and Thomas Co. had its origins when George Davies’ father Daniel and a William Thomas (not James’ brother) bought an old planning mill business on Race St along the Catasauqua Creek and built there a foundry and machine shop. This enterprise, the Davies,Thomas and Co. continued until 1868 when William sold his interest and moved back to Wales. The 1871 invoice on the right (for items sold to the Crane indicates that there was an affiliation at this time formed between Daniel Davies, Oliver Williiams and several others and between the Union Foundry (on Pine and Front) and the foundry here in “East Catasauqua” which was possibly the site of both the Williams, Davies & Co. and the Springdale Foundry and Machine Shop.  The company at one point was also renamed Daniel Davies and Son and continued until 1876 when Daniel Davies died and the company shut down due to poor business conditions.  However, the Sprindale Foundry and Machine Shop  existed into the recession of the early 1880s:  a note in the Allentown Democrat of April 21, 1880 states that “Messrs. Davies and Thomas, proprietors of the Springdale Foundry and Machine Shop, at Catasauqua, are fitting up the Emaus furnaces.”   In 1879, James Thomas, George’s brother-in-law and childhood friend, bought half the business and the two became partners in the foundry and machining business, making vertical and horizontal engines car casting and appliances for furnaces, mills and mines. The plant covered 20 acres and the buildings on the site provided 35,000 square feet of manufacturing space. There were 175-200 employees. The partnership continued until George’s death in 1894. 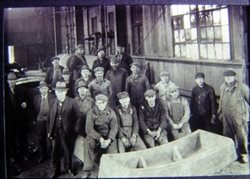 James remained involved in the business until his death in 1906, at which time his son Rowland D. Thomas succeeded him as president. Leonard Pickett became president in 1907, with Charles Horn as secretary and Harry E. Graffin (George Davies son-in-law) as treasurer. James Thomas’s son, Hopkin, held the position of general manager until his death in 1924. In 1914, the company worth was $0.5 million. Beginning in 1905, the company began making iron plates for lining under water tunnels using the shield method; its first such project was with the Pennsylvania Railroad for the railroad tunnels in NYC. Other projects were Holland (1923), Lincoln (1937), Queens-Midtown (1936–1940) and Battery-to-Brooklyn (1945) car tunnels and the MacAdoo and Harlem RR tunnels.

While in the process of making castings for he Holland vehicular tunnel, the George H. Flynn Corp of NYC, who was the master contractor for that project, came into control of the D&T Co.  The company was soon purchased by the United States Pipe & Foundry Co of Burlington, NJ, then repurchased by Mr. Davies in 1945, finishing out the contract for tunnel segments for the Battery-to-Brooklyn vehicular tunnel.  The assets were sold to the Schnieder Associates of Allentown and the the corporation liquidated in 1947. 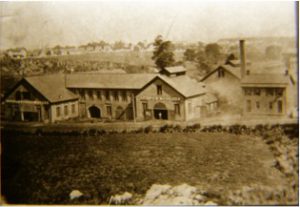 Other Site History
In pre-industrial times, there was a corn whiskey distillery on the property. The farmers would bring their corn to the distillery and would also bring their hogs for feeding. When the hogs were fattened up sufficiently, they would be brought home for slaughter. During the fall and winter there were as many as a thousand hogs in the distillery pens, and the area was nicknamed “Hogtown”. Increasing taxes on spirits and growing restrictions caused the proprietors to desist from distilling any more “Bolinky”, and the hog yards were turned into lumber yards by John Krauss, who also operated a planing mill. After the lumber yard burned to the ground, the site was purchased by Daniel Davies.

Catasauqua Machine Co was here later (see below). Campbell from Bethlehem bought the machine shop in1952 after the Catasauqua Machine Co went out of business.  Later, American Tire Company was here followed by the current occupant, Coupe & Son’s. Robert E. Moyer Associates a consulting engineering firm, and R. E. Moyer,Inc, occupied the rear of this historic site in the mid 1950s with an office on 10th at Union.  The heavy traveling cranes from the foundry were put to use fabricating boilers, custom manufactured equipment, spunglass pressure vessels, and fiberglass piping for the power, chemical and process industries.  The cranes still remain.   Miller Surplus occupies this part of the site.

In 1939, Frederick J. Walker and Milton O. Knauss, then secretary and manager respectively of the Davies and Thomas Co, formed the Catasauqua Machine Corp with S. M Rutledge of the George H. Flinn Corp of NY as president. They leased the machine shop of the Davies and Thomas Co to do jobbing machine work and normal maintenance and repairs for the Davies and Thomas Co. Customers included he Catasauqua Manufacturing Co of Catasauqua, Bethlehen Steel, Hershey Machine & Foundry of Manheim, Hydraulic Engineering Co of Alburtis, Andale Co of Landsdale, Sarco Manufacturing of Bethlehem, Ingersoll Rand of Nj.  The business was liquidated in 1950.     In the early 50s, David Heiney worked there out of high school, learning machining.  David’s brother, father and uncle worked there at the same time as did Tilghman Remmel, Betty Remmel Heiney’s father  (Milt Knauss was the last boss of the Crane before it closed and later was a foreman at Fuller Co’s machine shop.)

An article from the Bethlehem Globe Times in 1965 provides some history on this site.