When the Lehigh Canal was completed from Easton to Mauch Chunk, the Lehigh Coal and Navigation Company, owned by Josiah White and Erskine Hazard, was able to markedly increase production and shipments of anthracite coal. To further encourage anthracite sales, in 1838 the Lehigh Coal and Navigation Company offered water privileges from Hokendauqua to Allentown to any persons who would invest $30,000 in the erection of an iron furnace, run it successfully for three months, and use anthracite coal exclusively.

Erskine Hazard traveled to Wales to meet with George Crane, owner of the Ynyscedwin Iron Works who held the British and American patents for the hot blast process using hard coal in iron production. Crane suggested that his employee, David Thomas, travel to America and construct the furnaces. The newly formed Lehigh Crane Iron Company signed a contract with Thomas in December 1938. Thomas, at age 45, and his family arrived here in June 1939. He verified there was sufficient water drop at Lock 36 to power the hot blast and began construction of the first furnace on July 9, 1939. 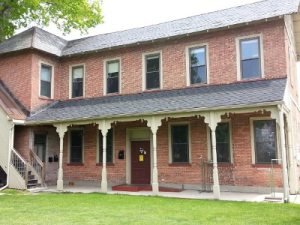 The Crane Iron Works was located along Front St extending west to the canal, and north and south from Willow to Pine Sts. There are several structures in this block on the east side of Front St that remain from the Crane:  the fire pump house, the main office, the stables and the “pattern house”. Front St was laid out by Biery from Biery’s Port as far as Wood St prior to the Crane’s construction. In 1841, the Crane extended the street to their office and plant, paving it with cinders – it became known as Cinder Street. It was graded in 1853, lowering it several feet and requiring higher stoops in front of the residences between Union and School Sts. 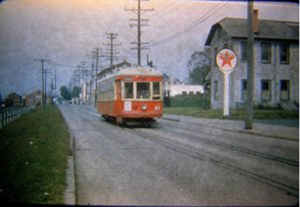 The Crane office was built at 327 Front St. This building housed the offices and the laboratory of the Crane Iron Company. From 1846-1855, a room was set aside on the second floor to house a lending library for employees. In 1893, the Crane Iron Works came under the control of the Empire Steel and Iron Co, who two years later Empire Steel and Iron moved their headquarters from Philadelphia into this office building. Paul Borowski, who was the chief chemist at the plant, and Edward J. Lynch operated the Catasauqua Testing Lab out of this building. In 1921 the iron works shut down and later the office building was remodeled and used by the Catasauqua Chapter of The American Red Cross. In 1930 Leonard Peckitt was president of the Foundry and Pipe Co headquartered here. The building was later purchased for storage by Luke and Earl Blocker who ran the Texaco gas station and hardware store next door, The first floor of the office building now houses a clothing consignment shop; the second floor has been converted into two apartments.

The stables were located to the rear of the property facing Second. A building to the right of the office, currently the rear of the of Biery’s Port Auto Body shop, was used for storage for the Crane. The front of the building was added on as a Texaco gas station in 1939, and later became Blocker’s Hardware Store. It now houses The Gas House Dance Hall. Blocker’s Service Station was established originally on the west corner of Front and Bridge under lease of the Tide Water Co in 1930 before Earl Blocker joined his Brother Luke in the business. In 1939 they erected a new station at the NE corner of Front and Bridge as Blocker and Son, before moving to this location in the 300 block of Front St.

On the corner of Wood and Front was the old three story Pattern House, used to design and fabricate patterns for the Crane Iron Works. Patterns were stored there as well, as the center of the floor on each floor was open to allow a crane/pulley assembly to lift the patterns to different floors. The building later housed the Catasauqua Boys’ Club. Established in 1936 by the local Rotary, the club met in various places, including the old Stine Building on Church St. In 1939 a fund drive raised the money needed to purchase the pattern building from the Crane Iron Works. The third floor was made into a gymnasium, the second floor was game (and later, TV) rooms and used to store equipment, and the first floor was a game room, showers, lavatory and heating plant. Supports and beams were modified, a vestibule and new entrance added, and the exterior stone-coated. The club was incorporated under the the Boys’ Clubs of America. It is now commercial and residential space.

The Crane had a lumber yard in the area between the Pattern House and the office, as shown on the Sanborn map of 1896.

The building that houses Blondies was once a baitshop, Louis Deustch Tackle Shop, on the first floor, with living quarters on the upper floor. It was a used record shop in 70’s. It may also have previously been used by the railroad to weigh/monitor the rail cars that passed as well: the railroad bed and tunnel entrance for the Catasauqua line that ran In between Blondies and what was the Crane Office, carried ash to the ashpit on the east side of town.

The small building to the left of Blondies at the street’s edge was the borough’s first fire station, built by David Thomas. It housed a water pump. After that, it was a barber shop established in1870 and operated continuously as a barber shop into the 1990’s. The first barber here was Wm Welch. George Fitzhugh became his assistant in 1873, purchasing the business upon Welch’s death in 1874. Fitzhugh lived at 201 Church. Stephen Todd bought the business from his brother in 1929 and was still its owner in the 50s. It can be seen in the WWI homecoming parade photo below. 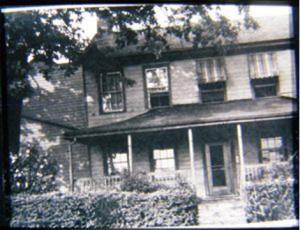 At the SE cover of Front and Church (current site of TD Auto Sales and Service & previously Cassie’s Sunoco), the Lehigh Crane Iron Co, built in 1839 what would be the first home of David Thomas and his family. (See Mansion District for Thomas’s later home). His home faced the Iron Works. Until water mains were run, a well drilled on the corner next to Thomas’s residence was the source of water for all the families who lived and worked for the Crane. Also next to the residence, along the street was a stone ice house, later used as a small store (still owned by the company). David Thomas installed a sundial here so workers would know when to come to work. The sundial remained here for 30 years. In 1854, David Thomas built, and moved into, a large frame house on the corner of Pine and Second St. 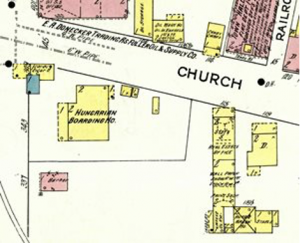 Other Occupants of Crane Co. House at Front and Church:

After Tthe Thomas’s moved, John Williams < cashier of the Crane Iron Works, and his family moved into the reJohn Williams was born in Landore, Wales, in 1824, and, at the age of 8, came with his parents to America, locating near Schenectady, N. Y. At fourteen he went to work as a clerk, and then followed the rest of the family to Catasauqua in 1845. (It is believed that David Thomas was friends of the Williams in Wales.) He began work at the Crane Iron weighing the ore and limestone that was hauled by horse teams to feed three furnaces. In 1849 he was promoted to the position of Assistant Cashier, and, after the death of Owen Rice, he was promoted in 1856 to the office of Cashier. He later became an officer of the Catasauqua Manufacturing Company, was Passenger Agent for the C. & F. R. Ill. Company, was a director and later President of the Catasauqua Gas Company, Vice-President of the National Bank of Catasauqua, director of the Lehigh Valley Trust and Safe Deposit Company of Allentown, President of the Farmers’ Fire Insurance Company of Upper and Lower Saucon Townships, and President of the Fairview Cemetery Association. His wife, Emma Caroline Heilig, daughter of Rev. George Heilig, a Lutheran clergyman in Montgomery County, repeatedly declared the happiest period of her life was the season of her housekeeping on Church Street. For a while the family lived in Fuller’s Block. During 1870, the Williams erected a beautiful home on Bridge Street, where they lived until their deaths, his in 1892 and hers in 1913. This home was torn down when the Fullers built their mansion on the upper end of Bridge (SW corner of Howertown and Bridge). John Williams also built the house at 540 4th St. for his son and the double-house at the corner of 4th & Pine where his daughters and their spouses lived.

The 1913 Sanborn map shows the old DT home as an Hungarian Boaarding House – housing recent immigrants who came to work at the Crane. Martha Capwell Fox recalls the following story from her youth: When her grandfather ran the Pennsylvania Hotel during that time, most of their patrons spoke Gerrman or Hungarian. A Pinkerton ‘spy’ hired by Peckitt to find out if there was strike talk going on, came into the bar, but didn’t learn anything there, not knowing either language.

The Sanborn map shows a Candy and Cigar store on the extreme corner of the lot (next to the ‘blue’ (masonery) structure used for receiving ice) and extending across the sidewalk to the street edge. The 1908 directory lists this as being operated by Robert Sharp of Fullerton. This very small building/shop also shows up on earlier Sanborn maps and can be seen in the photograph taken during the WWI Homecoming Parade in 1919. The photo also shows the David Thomas house and the old fire house/barber shop on the right side of the picture. The large building on the far right which was the barber shop still stands today on the NE corner of Front & Church.