West Bank of the Lehigh opposite Catasauqua

West Bank Of The Lehigh Opposite Catasauqua 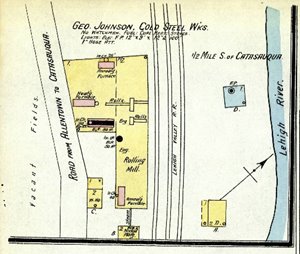 George Johnson Cold Rolled Steel
Location: Opposite side of the River, 1/2 mile below Race St Bridge
Year built: 1880
Henry Johnson came to the area in 1880 and, having worked in the steel industry in Sheffield, England, leased an old forge in Ferndale (now Fullerton) that was originally used to make shovels, and later horse shoes.  He and his wife Rebecca refitted the plant to roll thin bright steel for watch and clock springs, flat keys, shuttles, plates for sewing machines, etc.  This would be the first, and only, plant of its kind:  the technology for tempering and rolling cold steel was Henry’s secret process.  They lived at 563 Howertown Road.  Their daughter married Noah Davis, a master mechanic at the Crane, then machinist for Bethlehem Iron, and in 1897, left the area to become foreman at the Standard Castor Works in NYC.  Their son George Johnson, who was also in the iron and steel business, came to Catasauqua in 1874, assisting his father, and taking over the plant when his father died in 1881.   George passed the technology onto his oldest won William, however, William died in an accident at the mill and upon George’s death in 1903, and death of Rebecca in 1907, George’s other sons were not successful in continuing the plant and the technology died.
By 1908, the plant had been retrofitted as the Hercules Metal Works Brass Foundry by Arthur Williams. 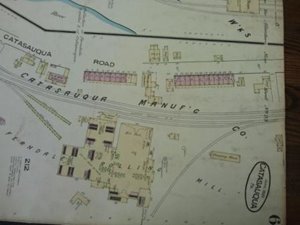 Catasauqua Manufacturing Co Mill D
The Catasauqua Manufacturing Company (CMC) was originally incorporated as the Northern Iron Co with D. Thomas as president, to make armor plate for war vessels and rails.  However just as the plant was ready to start production, the Civil War ended and the mill was changed to manufacture tank and boiler plate, afterward adding sheet iron.  William Hopkins became superintendent in 1866 and an 18in bar-iron train and a 10 in guide-mill train were added to the plant.  In 1867, Oliver Williams became general manger and John Williams, secretary.  In 1868, CMC took over operation of the East Penn Iron Co/Lehigh Manufacturing Co, a rolling mill built in Ferndale/Fullerton in 1864 under a lease arrangement, then purchased the plant in 1870.  The Ferndale plant was run by Edward Edwards and produced bar and skelp iron (iron forged into narrow strips and ready to be made into pipe or tubing by being bent and welded).   David Thomas, assisted by his sons, continued as president until 1879 when Oliver Williams took over.
In 1882, the total production of the two mills was 36,000 tons; they employed 600 people, and the company was valued at $2 million. 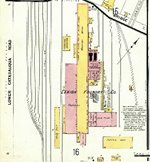 An additional mill was erected just south of the main mill in Catasauqua and ‘Mill D’ was added in Ferndale.   At that time, it was the largest merchant iron mill east of the Alleghenies.
A prolonged strike in 1892 followed by the Panic of 1893 caused this great company to fail.  The plants were dismantled and the property in Catasauqua later became part of the F. W. Wint Co; the plants in Ferndale were sold to James W. Fuller II who organized the Lehigh Foundry Co (1908 Sanborn map section). 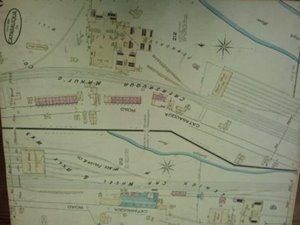 Name:   The Lehigh Car, Wheel & Axle Works
Location: Opposite side of the River, 1 mile below Race St Bridge
Year built: 1866
Built by:  Charles D. Fuller & William R. Thomas
The Lehigh Car, Wheel and Axle Works was formed on or about March 13, 1866 by Charles D. Fuller and William R. Thomas I, to engage in the manufacture of railroad car wheels. A tract of land was selected on the line of the Catasauqua and Fogelsville Railroad west of the “Roundhouse,” but, upon further investigation, it was thought advisable to erect the plant on the main line of the Lehigh Valley Railroad. This industry was then established on a tract of about eight acres of land purchased from Jacob Lazarus, which was located between the Lehigh Valley Railroad and the public road to Allentown, a mile south of the Biery (Race Street) Bridge. The plant originally had a capacity of fifteen wheels per day.
In 1868, James W. Fuller II, along with James H. McKee and others organized the firm of McKee, Fuller and Company and they became proprietors of the plant, with James W. Fuller II serving as president of the concern. Within ten years the only remaining partners were James H. McKee and James W. Fuller II. The company struggled along with varying success until 1880, when a contract was obtained to supply the Erie Railroad with eight-wheeled railroad cars. In order to complete this contract, McKee, Fuller and Company purchased from the National Bank of Catasauqua the vacant Frederick and Company car shops, which adjoined the south end of their plant. The plant immediately became busy and at one time the lumber arrived so fast that every siding was blocked with laden cars between Allentown and Catasauqua, and for a time fifteen hundred men were employed and Ferndale (Fullerton) became a thriving village. From this time on the success of the firm was assured and on February 13, 1883, William W. McKee and Benjamin Franklin Swartz were admitted to the firm. At about the same time a forge to forge the axles was added, and the business increased so fast that in the first six months of 1883 they built, complete, eighteen hundred and forty-nine eight-wheeled cars. This business amounted to $2,800,000 for the year. The capacity of the works in 1884 was sufficient to do a business of $4,000,000 per annum. The size of the plant continued to increase to sixty acres and the buildings extended along the road for nearly a mile from Ferndale station to Gap Junction. In 1891 the manufacture of cars was abandoned and for a time the business of the plant was directed toward car-wheels and general castings.
With the death of James H. McKee on November 5, 1895, the interest of his several heirs was placed on sale and acquired by the remaining members of the firm. It became a necessity, owing to the large interests involved, so as to prevent jeopardy to the interests of the others in case of the death of a remaining partner, to incorporate the plant. A charter was obtained February 5, 1901, and the business continued under the name of Lehigh Car, Wheel and Axle Works.
The type of business changed with the new century and the plant became engaged in manufacturing castings and crushing machinery, and the “Lehigh Fuller Pulverizing Mills” used by cement companies. The deaths of William W. McKee occurred on January 28, 1905 and B. Franklin Swartz on April 8, 1909. James W. Fuller III had entered the employ of the Lehigh Car, Wheel and Axle Works as an apprentice and he subsequently became a salesman, treasurer, general manager and with the death of his father, James W. Fuller II on January 15, 1910, president of the company. Joseph S. Elverson, brother-in-law of James W. Fuller III, served as secretary and treasurer of the company.
During a reorganization of the company in 1918 its name was changed to Fuller-Lehigh Company. About this time the firm purchased the patent for a pneumatic pump developed by Alonzo C. Kinyon. The pump, used to convey pulverized materials, was marketed as the Fuller-Kinyon pump, which became standard equipment in cement mills all over the world. In January, 1926, James W. Fuller III sold the Fuller-Lehigh Company rights, patents and properties, with the exception of the Kinyon pump patent, to the Babcock and Wilcox Company for $3,000,000. The Babcock and Wilcox Company continued to operate the Fuller-Lehigh plant until 1936, when operations were transferred to Barberton, Ohio.  At that time, the Fuller Company, using the Kinyon pump patent, relocated to the Crane Iron site in Catasauqua, and continued business serving the cement industry until selling out to F. L. Schmidt Co in 1990.  The F. L. Schmidt Co still ownes land andn operates a research facility on the north side of the Pine St Bridge.
Other Site History:
The Borough of Catasauqua purchased the Crane/Fuller.F. L. Schmidt property between Willow and the Pine St Bridge in 2012. 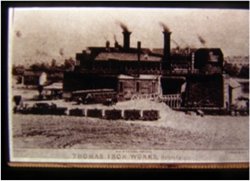 Name:   Thomas Iron Company
Location: Hockendauqua
Year built: 1854
Built by: Stockholders of the Thomas Iron Co
Along with construction of the iron furnaces, the town was also named and laid out along with lots designated for a school, a church and 200 company homes. Furnaces 1&2 went into blast in 1855, No 3 in 1862, No 4 in 1863, Furnace No 5 in 1873, & No 6 in 1874. Samuel Thomas, DTs oldest son, constructed the plant and was its superintendent until 1864, when he became president of the Thomas Iron Co, and his younger brother John (previously superintendent of the Crane Iron) became superintendent of the Hockendauqua plant.  Samuel resigned in 1887 and John retired in 1893.
Meanwhile, Lock Ridge Furnace was built beginning in 1867.  These furnaces, designated No 7 & 8 went into blast in 1868-9.  The Keystone furnace in Glendon  (No 9) and the Saucon Iron Company in Hellertown (Furnaces 10 & 11) were both purchased in 1884.  The Thomas Iron Co also operated the Lucy Furnace at Glendon.
Following a similar history as the Crane Iron, the Thomas Company sold off in 1922 with furnaces 1&2, newly updated, still in operation.  The Keystone furnaces were sold in 1917.  The Saucon Furnaces in Hellertown and the Lock Ridge furnaces were shutdown in 1921, both dismantled for scrap.
Other Site History: Land purchased by Thomas for the Hokendauqua plant was previously the Butz farm.