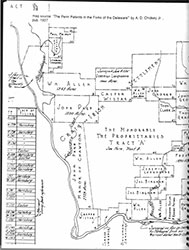 n the early 1700’s, this area, then part of Allen Township, was settled by the Scots-Irish and the Germans. The Scots Irish came here during an early potato famine in Ireland, led by Colonel Thomas Craig. The group arrived in Philadelphia in 1728 and proceeded up the Delaware. Part of the group continued up the Delaware past present-day Easton settling what is now Mt. Bethel. Thomas Craig’s group came up the “west branch of the Delaware” (Lehigh River) to the lands of John Page of England. Page obtained the land from the William Penn family for settlement of a debt (he was the lawyer handling the case for the family owed the land). The lands extended from roughly the Monocacy Creek on the east to Hockendauqua Creek on the west.
The Scots-Irish settled on John Page’s land in Chawton Manor and set up permanent farmsteads c 1730 in this general area centering on present day Weaversville. Among these early settlers was Thomas Armstrong. When William Allen acquired lands in this area, the Scots Irish settlers were forced to purchase their farmsteads or leave. In 1750, Thomas Armstrong and his wife Susannah of the Craig/Irish Settlement purchased 331 acres of land on what was the estate of John Page, encompassing much of what is today south Catasauqua. This tract of land would become the property of George Taylor in the 1760s. The Armstrongs moved to Fagg’s Manor in Chester County, another Presbyterian Scots Irish settlement. Armstrong burial records.
The Scots Irish here pushed for the establishment of a county seat near by, so they would not have to travel so far to settle disputes. They worked closely with those in Easton to setup the county seat there, comprising many of its early officials. They also pushed for the break with England, being local leaders in the revolutionary war. The local English were not inclined to pursue separation. The local Germans, initially tried to stay independent, but were convinced by the Scots Irish to side with them against the King of England.

Grist Mill MapA water powered grist mill was built probably around 1752 on Catasauqua Creek near where it enters the Lehigh River. This site is currently the SW corner of Race and Lehigh Sts. The Scots Irish built several other mills further up along Catasauqua Creek and along Hokendauqua Creek.

Reference: Everyculture.com: The Scots-Irish descend from 200,000 Scottish Lowland Presbyterians who were encouraged by the English government to migrate to Ulster in the seventeenth century. Trying to strengthen its control of Ireland, England tried to establish a Protestant population in Ulster. Enlish were also encouraged to move there, and it is possible that George Taylor’s parents went there during that period, and George was raised there. Surrounded by native hostility, though, the group maintained its cultural distinction from the Catholic Irish. The same economic pressures, including steadily increasing rents on their land, frequent crop failures, and the collapse of the linen trade, coupled with the belief in greater opportunity abroad, caused many Scotch-Irish to leave for the American colonies during the eighteenth century. It is estimated that nearly two million descendants of the Scots-Irish eventually migrated to the American colonies.

From 1763 to 1775, 55,000 Scots-Irish came to from Ulster. Because of profound doctrinal differences with New England’s Congregationalism, the Scots-Irish Presbyterians opted for the religious freedom of William Penn’s colony; the earliest settlements in Penn’s colony were near Philadelphia in the 1720s. They reached as far west as Pittsburgh before finding greater opportunities in the southern colonies. The Scots-Irish and Scots alike were strongly represented in the push westward, though, and their participation in military campaigns was significant. Darien, Georgia, was founded by Highland Scots in service to General James Oglethorpe, and their assistance was invaluable in protecting the British colonies of the Southeast from the Spanish in Florida. These Highland Scots strongly protested against the institution of slavery in the colony, setting a precedent for strong anti-slavery sentiment that stood against the Scots-Irish planters and English colonists who were eager for slavery to help build the colony and amass fortunes.
Read more:http://www.everyculture.com/multi/Pa-Sp/Scottish-and-Scotch-Irish-Americans.html#ixzz45py4Nkbi