Other Industries In Catasauqua

Other industries followed the success of Crane Iron.  The Crane Iron was not an integrated iron works, though during its history, it had a small foundry and boiler works on the property first owned and operated by the works, then leased out to others,  It was primarlily a pig iron supplier to other foundries and mills both in Catasauqua and where ever the canal and trains carried its output.

The industrial Walking Tours provide more detail on the companies identified below that were located in Catasauqua.

IRON RELATED INDUSTRIES
The Union Foundry and Machine Company was built here c 1850 by John Fritz with his brother George Fritz and brother-in-laws B. F. Shroud and Isaac E. Chandler.  The Union Foundry was built at the southeast corner of Front and Pine Streets for the purpose of carrying on a general foundry and machine business. It was the first foundry in the Lehigh Valley for the production of cast-iron columns which were shipped to all parts of the United States.  Fritz sold the business shortly after its construction, moving to Johnstown and opportunity of creating a three-high rolling mill to make rail.  The plant was purchased by David Thomas (Crane Iron) and Michel (a carriage maker who owned the neighboring property along Second St.  In 1869, Thomas sold the Union Foundry to Oliver Williams.  Williams operated the foundry on that corner until, for want of more space, it relocated to the north side of Race St between the canal and the river in 1901. It closed in 1905 after William’s death. In 1907, the site along Race St reopened as the Catasauqua Casting Company which operated until 1912:  Richard O. Koehler, William’s son-in-law, was CEO.
Also located along Race between the canal and river was the Globe Metal Works.  First established across the river, it moved here in 1889.  It operated five furnaces producing Globe bronze and Viola and Crane Anti-friction Metal.  The firm was operated by Clinton (and at times his brother Abbott) Fuller.  It closed in 1900. 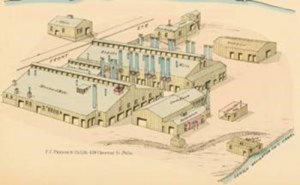 In 1856 the Catasauqua Gas Co. was established to provide coal gas for street lighting and fuel for starting up the furnaces..
The Lehigh Fire Brick Company was formed in 1868 to make furnace linings.  It closed along with the Crane in the 1920s.  Fire brick for the initial furnaces was imported from Great Britain.
The Catasauqua Manufacturing Company was incorporated in 1863 for the purpose of manufacturing armor plate for war vessels and rails. The mill later changed to the manufacture of tank and boiler plates and afterward added sheet-iron.  CMCo also constructed 24 company homes, known as Puddler’s Row above Arch on Front St and expanded across the river.  The business went bankrupt during a downturn in the economy in the late 1890s.  In 1902. the site in Catasauqua  was incorporated into the Wint Lumber Co.  When the lumber company burned down in the 1980s, the site was incorporated into Witt’s Tree Service.

The Davies and Thomas Foundry (1865 to 1947) was a gray iron foundry and machine shop. The company is recognized as the pioneer in the manufacture of iron plates for lining tunnels under rivers by the shield method. In 1904 the Davies and Thomas Company was awarded the largest contract for castings ever given to a single firm. Since 1905 it had supplied the extensive tubes for the sub-aqueous tunnels which connected NY City to ersey City, including the Lincoln and Holland Tunnels.  The Pennsylvania Railroad had decided to build an immense depot in New York City and to 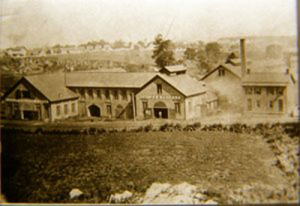 tunnel beneath the North and the East Rivers. A model of 8 rings, 20 feet long was made at the Davies and Thomas works for the Pennsylvania Railroad and was later displayed at the St. Louis Exposition. The principles were George Davies and James Thomas; the later was the son of Hopkin Thomas, the head mechanic at the Crane Iron. Hopkin Thomas had been a coworker of David Thomas’s in Ynescedwyn, Wales and had come to this county in the 1830s, becoming an important contributor in the early development of anthractire coal-fired locomotives and railroad technology.

Thomas, Davies, Williams and Fullers – all local industrialists – were principle stockholders and officers of the Edison electric plants in Catasauqua (1890) and Bethlehem (1882), the Wahneta Silk Mill (1890) and Catasauqua National Bank. Both Thomas families were also involved in the iron industry in nearby Parrysville and in Alabama.

Bryden Horse Shoe Works (1882) (later to become Phoenix Forge) was one of the largest horse shoe manufacturers in the world. The shoes are made in many varieties and shipped to all parts of the world. One of the company’s most noteworthy orders involved the weekly delivery of a train-car load of horse and mule shoes to the British Government during the Boer War, 1899 to 1910. This allowed full employment at the facility and the Bryden became one of the largest industrial employers in the Lehigh Valley. The Bryden was formed by Oliver Williams who, prior to that, manufactured horse shoes out of the Union Foundry. The company passed to his daughter Jessica and son-in-law, George Holten upon William’s death.

Other iron-related industries that flourished in Catasauqua were Catasauqua Boiler Works, McIntyre Foundry (both offshoots of the Crane Iron Works), Graver Tank and Manufacturing, and Hercules Metal Works.

Other manufacturing included The Lenox Manufacturing Co., Catasauqua Motor Car Works, The Crystal Ice Company, Thermometer Works. The F. W. Wint Company was engaged in the sale of lumber, coal, planning mill products, contractors’ supplies, caskets and undertakers’ supplies, custom kitchens, paints, hardware and furniture. The history of the company dates back to 1853.  Goldsmiths Planing Co was also an active lumber and construction business in town.  For a time there was a Rubber Ribbon plant across the creek from the Davies and Thomas Co.

More information on  the iron industry and allied businesses in Catasauqua’s history is available in Dale Wint’s history.

SILK INDUSTRY
There were several silk Mills in the boroughs. One of the earliest in the valley was the Unicorn Silk Mill in North CatasauquaIn at the upper end of Front Street, which opened in 1886.  In 1890, the Davies and Thomas partnership built the Wahnetah Silk along Lehigh Street below Race. In 1897 Desiderius George Dery opened a silk manufacturing plant known as the Dery Silk Mill on the corner of Race and Front.  He was able to build an empire and,by 1919, Dery became the largest individual silk manufacturer in the world, with 42 silk mills, employing over 10,000 workers up and down the east coast of the United States. As his wealth grew he built a Georgian style home, which in 1917 was altered and enlarged in the Classic Revival style with Beaux Art influences to include an art gallery, ballroom, astronomical observatory, scientific research laboratory, solarium and indoor pool. In 1920 Dery attempted to “corner” the world silk market which required vast amounts of money. However the Japanese government whose international silk interests were threatened by his actions dumped huge amounts of raw silk on the market, breaking Dery’s “corner”. When his creditors demanded to be paid the money they had loaned him, his empire collapsed. The Dery Mansion, at 5th and Pine Streets still stands today. Other mills included the Catasauqua Silk Co. on Race St. south of the canal and McBride Silk Bros across the river in Fullerton.

In pre-industrial days, the German farmers operated a corn whiskey still along Race St north of Catasauqua Creek, which doubled as a feeding area for hogs – the area was known locally as “Hogtown”, aka East Catasauqua.  A wood planing shop followed, then a machine shop, and after that, the Davies & Thomas shops occupied the site.
When David Thomas set up the iron works, he created temperance organizations to discourage workers and their families from drinking. But by 1850, two hotels in town applied for, and were approved, liquor licenses. There were many hotels in town which began as board and lodging for workers that evolved into bars serving alcohol, with boarding rooms upstairs. There were also many private societies and clubs where men could retire for a cigar and beverage.  It didn’t take long for the  brewing industry to take hold in Catasauqua surviving for almost a century, beginning in 1867 and ending in 1964. Two breweries, the Catasauqua Brewery and Eagle Brewery, competed until the time of prohibition in 1920. The owners and products changed hands many times over the years, surviving through Prohibition.

CEMENT INDUSTRY
After the Crane Iron closed, the property was purchased by the Fuller Company in 1926. The Fuller Company’s flagship product was the Fuller-Kinyon Pump, machinery which transported solids using air and a motor-driven screw, providing a continuous flow of pulverized coal to furnaces and pulverized stone to cement kilns. Fuller also provided ball mills for pulverizing solids for the pneumatic conveying system.  The Fuller system was key to increasing the scale of production equipment. After changing ownership a few times, the Fuller Company was purchased by F. L. Schmidt in 1998.  The research facility on the north side of the Pine St bridge is still active.