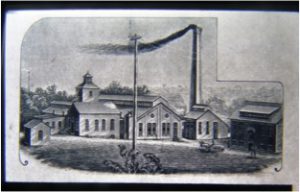 In 1890, the Davies and Thomas partnership brought Thomas Alva Edison here to design and supervise the construction of the first electric light plant. This resulted in the first incandescent lights for street illumination in Catasauqua. It was observed that the lights running up Race Street would be dimmer the further they went up the street, as the voltage dropped with distance. The DC system was replaced by AC beginning in 1900 at which point electric service for motors was added in addition to lighting. Prior to electric, lighting was provided by coal gas, starting in 1856. 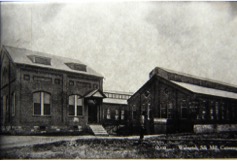 Also in 1890, the Wahneta Silk Company was chartered to manufacture silk fabrics. It was set up by George Davies, James & William R. Thomas, Frank and Charrles Horn, Samuel & Edwin Thomas, William W McKee, and James Fuller.  James Thomas was the first president and general manager of the plant and Frank Horn was the Sec/Treas. Alexander Pfeffer was engaged as the General Manager and he was sent to England to purchase machinery and silk. William R. Thomas was superintendent.  The first runs using silk plush proved unprofitable, and in 1902, broad silk looms were added. By 1918, the business had expanded to 755 looms and 550 employees, with silk skeins purchased from suppliers in NYC.  Later an Englishman, Stubbs, was brought here to supervise the operation. His family lived in the white brick home on Race St next to the Biery/Mauser home at 7 Lehigh St.

When James Thomas died in 1906, William Thomas, Jr. became president and general manager with Horn as Sec/Treas. After Mr. Horn died in 1920, Mrs. Ida Downs became Sec/Treas. The Wahnetah Silk Mill went out of business in 1935, and the mill, purchased by Epstein of Allentown, divided the factory, leasing operations until 1971, initially to Cands Fabrics and Catasauqua Weaving. In October of 1949, United Dying and Finishing operated out of the former Wahnetah building, processing tubular knitted cottons that went into making T-shirts, polo shirts, underwear, dresses, blouses, etc. United employed about 50 people. In 1982, the building, then occupied by Jackson-Allen furniture, was destroyed in a fire.

The Lehigh County Historical Society worked with the Thomas family to acquire the site, creating the park in the front of the George Taylor House.

Other site history:
Another silk mill, Catasauqua Silk Company, opened around the corner on Race St between the canal and river in 1911.  Organized by James J Seyfried (pres), Edward J Smith (sec), and Wilson J Smith (treas).  They equipped an existing two story frame factory building there and manufactured broad silks, selling into NYC.  Frank J Schleicher, initial superintendent; resigned in 1913 and was replaced by Harry O. Glase/Glace.   The plant was enlarged (new 36 sq ft  building) in 1913.  In 1914 James J Seyfried died, and the plant was leased by Anchor Silk in 1915; W J Smith purchased the plant, then resold it to General Silk Co, organized by John Pasquelle, formerr supt of the John Meyer Silk works in Northampton (owners from Allentown).  General Silk Corp added a dozen looms.  One of the buildings of the Catasauqua Silk works was purchased by Smith Candy Co when they moved the business from upper Race St to thi site.

Across Lehigh St, In 1897, Daniel Milson, Jr. opened a coal yard on Canal St. (now Lehigh) below Race St. Milson was the brother of Dr. Charles Milson, who married Camilla Deily in 1884. Dan also was the first oil dealer in Catasauqua. He had a small building along the L&N siding south of Catasauqua Creek, just east of Lehigh Street. The oil was delivered in barrels and was probably distilled from coal, called coal oil or kerosene in those days.