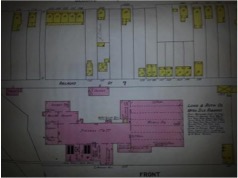 In 1880, local authorities from North Catasauqua went to Paterson NJ to entice a silk company to come to Catasauqua and provide employment for the large female population of the community. Negotiating with proprietors of the Unicorn Silk Manufacturing Company, they agreed to build a mill for the silk company, the latter to pay the interest on the investment and to buy the building at a stipulated price if it should at any time wish to do so. The venture was successful and the factory was expanded. However, in 1890 a large fire destroyed the building. While the workers were able to escape, an explosion caused an outside wall to collapse, killing firefighters and others standing close to the building. In June of 1890, The Unicorn Silk bought the shares of the Catasauqua Improvement Co, taking on the responsibility of rebuilding the mill after the fire. John F. Degener was then president. The building was rebuilt and operations re-commenced by the Degener Brothers of NY, then living at the corner of Bridge and Crane (actual house unknown). (more info on the fire below)

An article in the Allentown Leader of July 28, 1896 tells of a friendly baseball competition between employees off the local silk mills.
“An interesting game of base ball was played on the Catasauqua grounds Fourth and Chapel Streets on Saturday afternoon between the batters of the Wahnetah Silk Mill and the batters or tne Unicorn Silk Mill. The game was called at 3.30 o’clock and lasted two full hours with a victory for the Wahnetah boys by a score of 14 to 12. The features of the game were the errors which couldn’t be put on the score sheet for want of space. Harry Gordon, the pattern maker at the Wahnetah Silk Mill, made a bat with a hole the size of a ball to be presented to the first man who struck out. The centleman who received this wooden emblem was John Cooper, the assistant superintendent at the Wahnetah mill. The Unicorn mill boys had three pitchers knocked out of the box by the hard hitting Wahnetah sluggers. The happiest man on the grounds was Billy Twelve Dozen, fhe manager of the Wahnetah nine who was crowned with a black silky, sailor shirt and white pantaloons. The following Is the list of players who were accepted in the challenge: The Wahnetah nine was Johnny Bull, p: Blgnosed Jack, c; Peanut Sport, ss; Yellow Pat, lb; Die Goat, 2b; Ugly paPe Charlie. 3b;’ Bug House Rube, If; Fourth of July Jack, cf; Big Headed Irish Mack, rf; Three Fing Bill, Mgr; Blgfooted Clam, mascot. The Union team was Patty the Greenle, the Irish Cyclone, c; Jim Greenville, the Jersey Iily, p; Spratchy O’Donnell Water street bruiser, lb; Pie faced Boh Kiitmnn, the lock tender. 2b, Brick top. r-ecKciea race forty Come, ss; Kd Manning, comedian kicker, 3b; alike O Mara. $1000 beauty, nobody’s claim rf; Jack Leach, Doolalah from the Soudnam, cf; Bowleged Cal Peters, the egg huckster, If; Hon. John Botton. Afler the game the Unicorn people sat down to a clam bake at the Northampton House and the Wahnetah nine went to Breinig’s grove and done away with two and one-half Barrels of heer. two boxes of Weiss beer. 400 cigars. 10 pounds of bologna, 10 pounds of cheese, I5 loaves of bread, a dozen plckels and 100 pretzels. They nil left at a late hour well boozed and ready to go napping for a night and a day.”

The business was sold to Lund and Roth who continued the business until 1929, then sold the operation to the Stark Brothers of NYC, clothing manufacturers (Louis, Harry, Herman, 244 Bowery, NYC).  Stark became a division of Burlinton Mills, making Royal Swan woven edge ribbons.

The following information was taken from a news article printed May 2, 1890 in the Cranberry (NJ) Press. The article was transcribed by Stu Beitler and submitted to http://www.gendisasters.com. 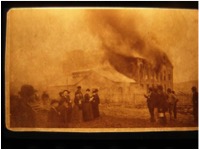 Fire in a Silk Mill at Catasauqua, Penn.
An Explosion Kills a Number of Volunteer Firemen
Founder of mill and others crushed by falling wall after explosion

At 6 o’clock in the morning fire was discovered in the large new building at Catasauqua, Penn., owned and occupied by the Unicorn Silk Manufacturing Company, of New York, with offices at 33 and 35 Greene street. An alarm was quickly sounded, but owing to the hour, the fire companies, which are composed of volunteers, mainly workmen employed in the different furnaces, factories and mills, were under the impression that the whistles were, as usual, calling them to their day’s work, and did not respond until the fire had been burning about twenty minutes.

Upon their arrival at the scene of the conflagration considerable difficulty was experienced in securing water for the fire engines, as the mill was built on a bluff overlooking the Lehigh Coal and Navigation Company’s canal and the Lehigh River, half a mile from the town. They ran their engines down a hill on the other side to the canal and soon had two streams of water on the building, which was by this time a mass of flames.

The mill employed 350 hands, mostly females. They were to have commenced work at 6:30. While they were assembling shortly before that hour fire was discovered in the dyeing-room. The place was without sufficient fire protection, and the flames spread rapidly. The employees [sic] rushed panic stricken from the mill and all got out safely. When it was seen that the mill was doomed the firemen and others devoted themselves toward saving goods, while another force got on top of a one story addition and on the roof.

Suddenly there was a terrific noise amid the flames, and it was at once known that a steam-pipe had exploded. The report caused the great crowd to retreat, but they had only gone a few steps when a section of the south wall of the mill nearly forty feet long and about four feet wide fell with a crash and landed on the roof of the new addition, thirty feet below. The fall of the wall is supposed to have been caused by the concussion of the explosion. A moment later the air was filled with smoke and steam and a cry of horror arose when it was discovered that thirty men had been buried in the ruins. The work of digging them out was at once commenced, and after hours of hard work the bodies were all taken out.

The killed were as follows:

CHARLES A FRICK, founder, aged twenty-five years and having wife and three children, burned and crushed. Died three hours after being recovered.

Three other men were fatally wounded and about thirty were badly injured.

The fire is supposed to have been caused by spontaneous combustion in one of the packing rooms. At 11 o’clock the flames were under control. The loss on building is $50,000, on machinery $35,000, and on stock $25,000. The loss is partially covered by insurance.

Catasauqua is a centre of large mining interests. A few years ago the authorities cast about for some industry that would afford employment for the large female population of the place. In Paterson they opened negotiations with the proprietors of the present Unicorn Silk Manufacturing Company, which ended in the Catasauqua Improvement Company building a mill for the silk company, the latter to pay the interest on the investment and to buy the building at a stipulated price if it should at any time wish do so.