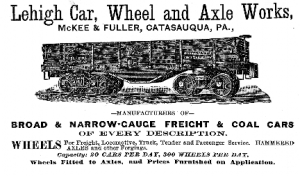 The Lehigh Car, Wheel and Axle Works was formed on or about March 13, 1866 by Charles D. Fuller and William R. Thomas I, to engage in the manufacture of railroad car wheels. A tract of land was selected on the line of the Catasauqua and Fogelsville Railroad west of the “Roundhouse,” but, upon further investigation, it was thought advisable to erect the plant on the main line of the Lehigh Valley Railroad. This industry was then established on a tract of about eight acres of land purchased from Jacob Lazarus, which was located between the Lehigh Valley Railroad and the public road to Allentown, a mile south of the Biery (Race Street) Bridge. The plant originally had a capacity of fifteen wheels per day.

In 1868, James W. Fuller II, along with James H. McKee and others organized the firm of McKee, Fuller and Company and they became proprietors of the plant, with James W. Fuller II serving as president of the concern. Within ten years the only remaining partners were James H. McKee and James W. Fuller II. The company struggled along with varying success until 1880, when a contract was obtained to supply the Erie Railroad with eight-wheeled railroad cars. In order to complete this contract, McKee, Fuller and Company purchased from the National Bank of Catasauqua the vacant Frederick and Company car shops, which adjoined the south end of their plant. The plant immediately became busy and at one time the lumber arrived so fast that every siding was blocked with laden cars between Allentown and Catasauqua, and for a time fifteen hundred men were employed and Ferndale (Fullerton) became a thriving village.

From this time on the success of the firm was assured and on February 13, 1883, William W. McKee and Benjamin Franklin Swartz were admitted to the firm. At about the same time a forge to forge the axles was added, and the business increased so fast that in the first six months of 1883 they built, complete, eighteen hundred and forty-nine eight-wheeled cars. This business amounted to $2,800,000 for the year. The capacity of the works in 1884 was sufficient to do a business of $4,000,000 per annum. The size of the plant continued to increase to sixty acres and the buildings extended along the road for nearly a mile from Ferndale station to Gap Junction. In 1891 the manufacture of cars was abandoned and for a time the business of the plant was directed toward car-wheels and general castings.

With the death of James H. McKee on November 5, 1895, the interest of his several heirs was placed on sale and acquired by the remaining members of the firm. It became a necessity, owing to the large interests involved, so as to prevent jeopardy to the interests of the others in case of the death of a remaining partner, to incorporate the plant. A charter was obtained February 5, 1901, and the business continued under the name of Lehigh Car, Wheel and Axle Works.

The type of business changed with the new century and the plant became engaged in manufacturing castings and crushing machinery, and the “Lehigh Fuller Pulverizing Mills” used by cement companies. The deaths of William W. McKee occurred on January 28, 1905 and B. Franklin Swartz on April 8, 1909. James W. Fuller III had entered the employ of the Lehigh Car, Wheel and Axle Works as an apprentice and he subsequently became a salesman, treasurer, general manager and with the death of his father, James W. Fuller II on January 15, 1910, president of the company. Joseph S. Elverson, brother-in-law of James W. Fuller III, served as secretary and treasurer of the company.

During a reorganization of the company in 1918 its name was changed to Fuller-Lehigh Company. About this time the firm purchased the patent for a pneumatic pump developed by Alonzo C. Kinyon. The pump, used to convey pulverized materials, was marketed as the Fuller-Kinyon pump, which became standard equipment in cement mills all over the world. In January, 1926, James W. Fuller III sold the Fuller-Lehigh Company rights, patents and properties, with the exception of the Kinyon pump patent, to the Babcock and Wilcox Company for $3,000,000. The Babcock and Wilcox Company continued to operate the Fuller-Lehigh plant until 1936, when operations were transferred to Barberton, Ohio. At that time, the Fuller Company, using the Kinyon pump patent, relocated to the Crane Iron site in Catasauqua, and continued business serving the cement industry until selling out to F. L. Schmidt Co in 1990. The F. L. Schmidt Co still ownes land andn operates a research facility on the north side of the Pine St Bridge.

Other Site History
The Borough of Catasauqua purchased the Crane/Fuller.F. L. Schmidt property between Willow and the Pine St Bridge in 2012.