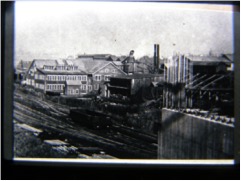 John Stoddard leased land in 1853 from Owen Swartz at the corner of Front and Spring Streets to receive and sell lumber shipped by boat from White Haven. Owen Swartz was his sales agent. Stoddard sold out to Swartz just before the Civil War; Swartz took on Capt. Horatio D. Yeager as a partner, becoming Swartz & Yeager. In 1864, they added a mill and started selling coal. Swartz was married to Suzanna Peter, daughter of John Peter: the site was originally part of the Peter farm, and the stable for the Wint Co was originally the Peter stone farmhouse.

Yeager sold out to the Wint family in 1874: Ferdinand (F.W.), his brother James P., and Owen Fatzinger, a brother-in-law, the company becoming F. W. Wint and Company. Upon Ferdinand’s death in 1882, his son Rufus M. Wint joined the firm and James took over as president. By this time, the plant extended from Spring St to Lumber Street. The company was taken public in 1900, providing capital to increase the size of the property, buying the adjacent sites of the Catasauqua Manufacturing Co, extending the business down to Walnut Street. Owen F.‘s nephews Frank J. and Owen A. joined the business then. When James Wint and Owen F. Fatzinger died in 1905 and 1906 (shortly after Fatzinger built the elegant stone home on the corner of Bridge and Fourth Street), Rufus M. Wint took over. His son, Rufus W. G. joined the business in 1917.

Casket making was added to the business in 1919 responding to demand for caskets during the flu epidemic of 1918. The factory was built along Front Street.

In 1947, Frank J. Fatzinger sold his family’s interest to Rufus W. G. Wint and the business incorporated in 1948.

In 1957, the company began a kitchen cabinet line; with Dutch Maid Kitchens formed as a subsidiary in 1959 and added a kitchen showroom and home center in the 70s. 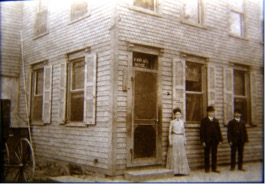 A fire in 1952 destroyed the planning mill at the corner of Spring and Brick Sts. Another fire in 1965 destroyed a number of lumber bins and storage sheds at the rear of the property. They stopped selling lumber and coal in the 50s, and sold off the lumber yard to the Butz Lumber Co of Palmerton in 1982. Two weeks later, a fire broke out in the old saw mill building, used as a storage shed, taking with it the casket factory and Home Center. The lumber yard never reopened and the gutted buildings were torn down.

Frederick J. Wint continued to operate the F. W. Wint Casket Company until 1982, when it was sold to Robert J. Freed, his brother-in-law. Dorothy Freed continued the company after her husband’s death, then sold the business to the Reynoldsville Casket Company.