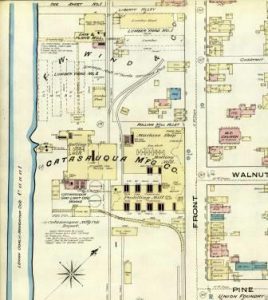 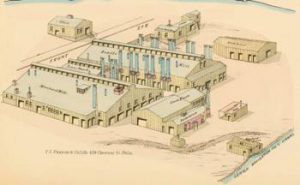 The Catasauqua Manufacturing Company (CMCo) was originally incorporated in 1863 as the Northern Iron Co with David Thomas as president to make armor plate for war vessels and rails. However just as the plant was ready to start production, the Civil War ended and the mill was changed to manufacture tank and boiler plate, afterward adding sheet iron. William Hopkins became superintendent in 1866 and an 18 in bar-iron train and a 10 in guide-mill train were added to the plant. In 1867, Oliver Williams became general manager and John Williams, secretary. In 1868, CMCo expanced by taking over operation of the East Penn Iron Co/Lehigh Manufacturing Co., a rolling mill built in Ferndale/Fullerton in 1864 under a lease arrangement, then purchased the plant in 1870. The Ferndale plant was run by Edward Edwards and produced bar and skelp iron (iron forged into narrow strips and ready to be made into pipe or tubing by being bent and welded). In 1872/3, the plant specialty was reported to be rolled railwayaxles of which they turned out 12,000 annually.  David Thomas, assisted by his sons, continued as president until 1879 when Oliver Williams took over. 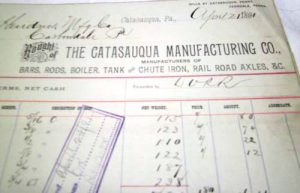 In 1882, the total production of the two mills was 36,000 tons; they employed 600 people, and the company was valued at $2 million. An additional mill was erected just south of the main mill in Catasauqua and ‘Mill D’ was added in Ferndale. At that time, it was the largest merchant iron mill east of the Alleghenys.

In 1890, Wm P. Hopkins, supt for 26 years, resigned and was replaced with Wm H. Graham (Mills A & C) and Edward Edwards, Mills B & D., assisted by R. Sayre Van Horn (of Catasauqua).  At that time, Hopkins built his own foundry in Slatington.

A prolonged strike in 1892 followed by the Panic of 1893 caused this great company to fail. The plant in Catasauqua was dismantled in 1900, and the property in Catasauqua later became part of the F. W. Wint Co.  The plants in Ferndale were sold to James W. Fuller II who organized the Lehigh Foundry Co there.

Other Site History
The land was originally part of the Peter Farm.

Before Wints expanded on the site, the Catasauqua Gas Co was here next to the canal across from Walnut St. The company was here as early as 1856. The original officers were Joshua Hunt, President; John Williams, Secretary; Solomon Beiry, Treasurer. Prior to this, similar gas manufacturing plants had been established in Allentown, Bethlehem and Easton in 1850. The plants “distilled” gas from coal. No records have been found that discuss the waste from that plant; it is likely that it was all used as fuel by nearby blast and puddling furnaces.

Records from the Crane Iron Works contain the books for the Catasauqua Gas Co, so there was some relationship between the two companies.  These records list all the customers in town and their usage, with the first being the Lehigh Crane Iron Company.  By 1881, Catasauqua Gas Co served North Catasauqua, Northampton, Coplay, Hokendauqua and West Catasauqua. In 1884, the Crane, which was the gas plant’s largest customer, erected its own gas works and withdrew as a customer from the borough gas works.  A record from Eng News and Am Railway Journal Vol 37 (1897) states that the company was considering plans for remodeling, as reported by Supt. Frank M. Tait.  Frant Tait went on to work for the electric plant on Lehigh St and later ended his career as president of Dayton Power & Light and a leader in the electric utility industry.

In 1900, the gas works and other local gas and electric companies all merged into the Lehigh Northampton Gas and Electric Co (see Sanborn map from 1908).  By 1913, after several permutations, the electric franchises all became part of Pennsylvania Power & Light, and all the gas manufacturing and distribution companies merged into Allentown-Bethlehem Gas Company. The local manufactured gas plant here became obsolete.