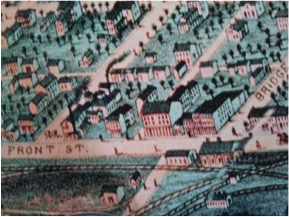 When the Crane Bridge closed to public traffic in 1904, forcing everyone back on to the Race St toll bridge or the North Catty Hokendauqua Bridge, it prompted the borough to erect a public bridge at the foot of Pine St. The Pine St Bridge formally opened in 1908. In 1953, the bridge was replaced and a traffic light installed. This was the second traffic light in Catasauqua; the first being at the Five Points intersection of Howertown, Second, and Union .
The first block of Pine St on the south side was a foundry into the early 1900s. After the Union Foundry moved, businesses opened on the unit block of Pine St and homes were built above Railroad.
David Thomas built his home at the SE corner of Second and Pine in 1856. Originally part of the Peters Farm, Thomas sold off lots on Pine above Second slowly, mostly to friends who built stately homes. The section of Pine above Second is part of the Historic Mansion District of Catasauqua.