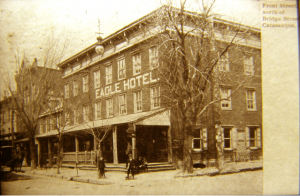 The Eagle Hotel
When the first train pulled into Catasauqua on July 4, 1855, all the town folk flocked to the rustic park along the bank of the Lehigh (later to become a cinder tip) to welcome it. The dignitaries on board proceeded to the Eagle Hotel for a banquet. The Eagle Hotel was one of two establishments to obtain the first liquor licenses in Catasauqua. On the north side of the Hotel, Franz Zellers (Austrian) ran a barber shop beginning in 1871, succeeded by his son Alvin in 1898. A variety of businesses operated out of the Eagle Hotel, such as barber, shoe repair and beauty shops.

Other Occupants of Site:
After the Eagle Hotel was torn down, 118 Bridge was built by GATX on the eastern part of the lot. 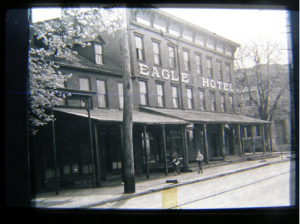 The side of the lot facing Front St, 505 Front St, became a hardware store operated first by Martin Graver in 1888, then as a branch of F. Hersch Hardware of Allentown. Later it became a fruit market, owned by Peter Thomas, he also had a fruit route that covered Catasauqua and the surrounding area. In 1938, his son purchased the business and moved it to 212 Bridge St.

In 1930, there was a shoe repair shop at 509 Front run by Mario Maciocia; he and his wife Theresa lived on the premises. Blockers built a new service station on the leased property in 1939, then moved to shortly thereafter to the site in the 300 Block of Front St, which they purchased. The Tyrol gas Station succeeded them and a grocery coop stood for a time on the northside of the lot. In 1947, the Rabe Brothers ran a filling & service station here. They purchased 550 Limestone St in order to enlarge their quarters and expand a fuel oil business ( the lot on Limestone St had been the Carriage House for the David Thomas Mansion). Mike’s Auto now occupies the SW corner of the lot.

Other Site History:
The building on the opposite side of Front St from the Eagle Hotel was the Lehigh Valley Freight Station, and before that an express office. During the 1880s it was used as a meeting place for a temperance society led by Oliver Williams. In 1930, the property was leased by the Blockers and was the site of their first service station.
The first bakery in town was established in the 1850’s on Front St, next door to the Eagle Hotel on property owned by Laubach. Run by Mr. Hiskey, he would deliver his products by basket.

Next to what was the old Eagle Hotel, 505 Front St was a gentleman’s store (1885-1891), then a grocery/hardware store. Now beside Mike’s Auto, the building houses a market established in 2014 on the street level (apartments above).
507 was a tobacco shop and 509 was a barber shop for many years (1885-1902 Sanborn maps). The 1890 directory shows Alvin and Francis Sellers operating the barber shop with Francis living upstairs. In the 1913 Sanborn map, the barber shop had moved into 507 Front, and 509 had become a cobbler shop. 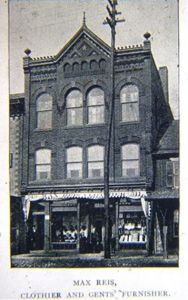 Before building on the 500 block, Max Reis operated his men’s clothing shop at 407 Front St.

In 1892, the Porter Lodge of the Masonic Hall moved into the new Reis Building at 513 Front Street above Bridge Street, where it remained for 85 years.

By 1913, the clothing business had been replaced with a grocery store.

In 1951, Robert Beitel moved Beitel’s Jewelry Store into this building from the bank building on the corner of Bridge and Front St. The bank & jewelry store had been established by his father, James Beitel.

Angelo’s Shoe Service, before moving to 407 Front St after the war, started his shoe business here in 1915. Angelo Ingelese learned shoe making in his native Italy.

Other Site History:
Before the Max Reis Building, in 1875, 511 Front St was a harness, saddle and satchel business run by Charles Mummey, a native of Northampton County. 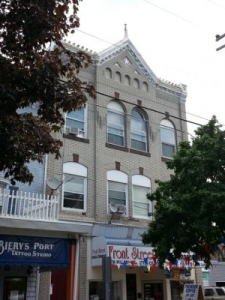 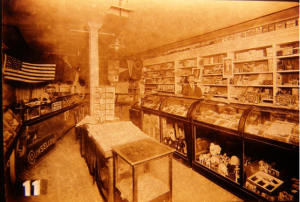 Charles W. Schneller was one of the oldest business men in town. He established a store at Second & Mulberry in 1848 before relocating here, where he was in business until his retirement in 1887. He manufactured and repaired tin, Japanned and sheet iron ware and sold all manner of stoves, heaters, ranges, wood and willow ware, and tin toys. He also provided plumbing and gas-fitting services. 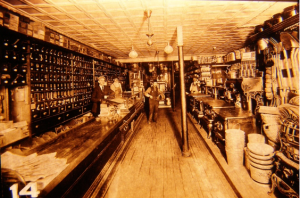 Schneller was born in Bethlehem in 1821 and moved to Catasauqua in 1848. He did much of the water main construction here in the 1850s-60s. He was a director of the National Bank of Catasauqua from 1878 until his death and was a founder of the Evangelical Church here. He is pictured behind the scales in photo #14. He and his wife, Mary, lived above the store. Charles G. Schneller was the grandson of George Charles Schneller, a Moravian missionary to the Caribbean. 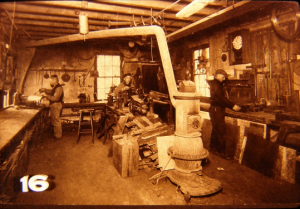 The young man in the middle of photo #16 is his son Charles C. Schneller at age 16 working in the tin manufacturing part of the business and who took over the business later. Another son of Charles Schneller, John P., opened up a tin and hot air radiator business at 120 Front St in 1888. In 1878 Cornelius F. Roth ran a photographic studio on the second floor. Roth also served as Justice of the Peace for two terms (1906, 1912).

In 1859, George Kopp also operated a tin and sheet metal business and sold stoves (and did installation) here a few doors above the Eagle Hotel. The same year, he built 607 Front St, the St George Hotel (now Tony’s Top Cat).
In 1889, Jacob Lipinsky opened a men’s clothing store in this block, later adding a women’s line. 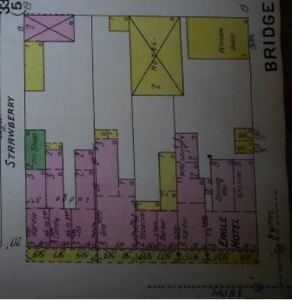 J.F.O. Agthe operated a drug store here in 1890. Agthe, born in Nova Scotia, was married to Hopkin Thomas’s granddaughter Katherine: they married in Hokendauqua at the home of her father, William R. Thomas. The Agthe’s lived in 1890 on Upper Second St and also for a time on Bridge St, possibly in the building that is now Hill’s Restaurant or in the building above Crane St, The1890 Directory lists their residence on upper Second, likely 723 Second St. W. T. Wilcox worked as a pharmacist here, leaving to take a position in Allentown in 1895. The Sanborn map section is from 1908. 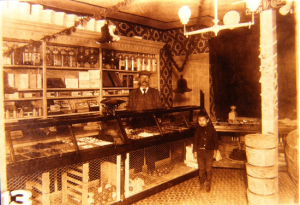 Frank A. Young had a novelty, candy, cigar and soft drink store in 517 Front c. 1914, which he purchased from Edward Schlaugh in 1910. He also sold trolley tickets to Allentown; the cost was 15 cents round trip.

In 1945, the store was purchased by John T. & Thelma Williams. They updated the lighting and display cases and sold sporting goods, paints, hardware, toys and house wares. After the shortages during the war, electric refrigerators for sale here symbolized the beginning of the post war economic boom. Huber’s Hardware store took over after the Williams’ in the area that is now the music store. A tattoo studio is also currently a tenant of the building.

Other Site History:
The land from Church St into North Catty, between the river and Howertown Road was the Peter Farm at the time the canal and Crane were constructed. John Peter was born in 1799 in Heidelberg Township and bought the land here from Andrew Hower, the heirs of Jno. Philip Faust, and others. His original home here was built by John Youndt near the corner of Bridge and Front St at a point between the Schneller’s Block and the Lehigh Canal. Peter sold his frontage along the river to the Lehigh Canal & Navigation Co to build the canal. He afterward built a substantial stone house and barn below what is now Walnut St. The house later became the stable for the F. W. Wint Company and was torn down when the site was bought by the Catasauqua Manufacturing Co. The barn remained into the 1900s. He was a weaver, and with the construction of the canal, became a locktender. While other local farmers were not in favor of David Thomas’s ideas and projects, John Peter was a supporter of his. After having sold off some building lots, Peter sold the remainder of the farm to David Thomas in 1849. 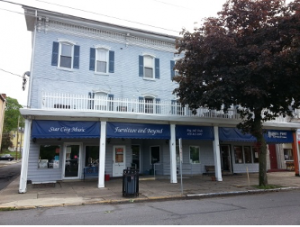 The Junior O.U.A.M. opened in 1881 as a patriotic fraternal organization dedicated to reading the bible in, and flying US flags over, public schools.

The original “5 and 10 cent” store was established in 1910 by A. J. Etheridge and Co in a leased space of the Jr. O. U. A. M. Building. James S. Quick took over the business in 1935, and expanded it, moving it to larger digs at 427-429 Front St in 1950, as the Ben Franklin “5 and 10”. This building became the Moose Home. In 1930, the Ladies of the Golden Eagle met here. This was the female auxiliary of the Knights of the Golden Eagle, a fraternal organization whose original objectives were to help its members find employment and aid them while unemployed. Membership was open to white males over 18, without physical or mental handicaps, who were able to write and support themselves, were law abiding of sound moral character and of the Christian faith.

Next door at 521 ½ Front was the office of the Amalgamated Assocof Iron & Steel Workers, circa 1930. 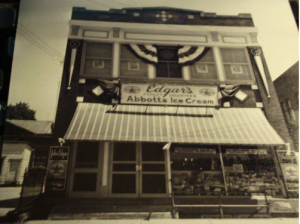 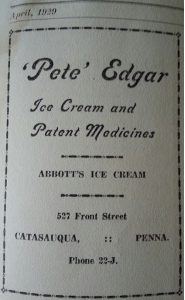 A store was established on the first floor which sold ice cream and Patent Medicines. In the 1950s the store, still in the Edgar family, sold patent medicines, toiletries, candy, cigars & tobacco and photo supplies.

There was a soda fountain which featured Abbot’s Ice Cream.
The second floor of the building housed a dental office and a photo studio. There was a wool shop in the basement.

Dr. Ralph J. Minner, had his office here beginning in 1916 and into the 50’s. He was a veteran of WWI and was very active in the community. During his term as president of the school board (1934-1939), the school built the swimming pool, bath house, pavilion and rest rooms at the Catasauqua Play Ground. While president of the Hanover-Catasauqua School Authority, the authority built the gymnasium in the school. He helped form the Boys Club here, was on the library board, was a church council member at St Paul’s for 25 year, a director of the National Bank of Catasauqua and president of the chamber of commerce. His office was in the Edgar Building at 527 Front St. He lived in the Dery Mansion. Dr. Barton had his office here later. 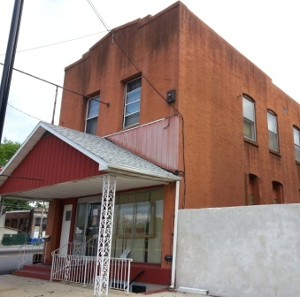 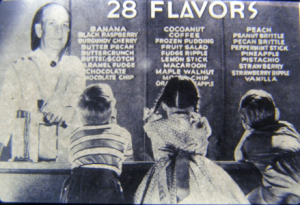 William Roxberry moved his barber shop here in 1912, after being displaced from the space which would become the Palace Theater, at the corner of Walnut & Front. He built one of the most modern “tonsorial parlors” in the LV here. Carl Giering, who operated a two chair shop on Bridge St, also operated the William Roxberry shop here prior to 1929, and again from 1930-1935.

In 1930, the Catasauqua Chamber of Commerce had their office here. 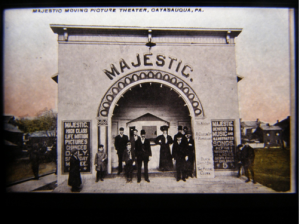 William H. Wentz was considered a pioneer in the motion picture business. He and his brother first opened a nickolet (charged a nickel) before building the Majestic Theater at Front and Pine.

They expanded the theater in 1914 going from 200 seats to 705. He also enclosed the lobby providing a more elegant movie going experience. 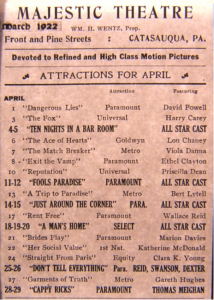 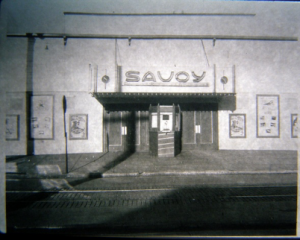 Wentz was civic minded, sponsoring a local baseball team and fitting the ground next to his building for seasonal sports. The ad was taken from a 1922 issue of the CHS Black & White.

Wentz sold the theater in 1933 to William G. Humphries, who changed its name to Savoy. Stanley Nyquist, was the proprietor from 1933-1948. He was originally from Reading, but lived in town on St. John’s St. 1933-1948. In 1947-48, he hired kids in town to mow his lawn, in exchange for letting them into the movies for free. Later Michael Golomb of Coply was the proprietor. The theater seated 546. The theater closed in 1962 and was torn down shortly afterward. The picture of the Savoy was taken just before it closed. The last movie shown here was Jason and The Argonauts. 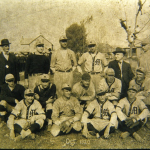 Other Site History:
The Union Foundry and Machine Shop was here from 1851 to 1901. Catty Mart/Gas Station is here now.