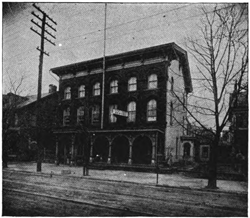 The hotel faced Second St, but the brewery was on Railroad. After Millhaupt in 1872, Christian Stockburger, who was the brewmaster, married Millhaupt’s widow and took over the proprietorship of the brewery, and employed seven people and produced 2500 barrels of lager per year. Stockberger died in 1885 and Mrs. Millhaupt’s sons-in-law Henry Geisel and Felix Keller, took charge of the brewery, but failed.

In 1900, H.H. Rice & Henry Kirsch bought the property, made improvements and began brewing beer. Rice bought out his partner and was owner/proprietor until 1906 when Charles L. Lehnert bought the brewery and took over. Lehnert, who learned his trade in Germany, enlarged the boiler house and engine room, built a bottling house, erected a three-story brew house, added modern machinery, and added new storage cellars with enameled steel tanks. By 1914, Lehnert was producing 8000 barrels of beer and porter per year. He also produced soft drinks. 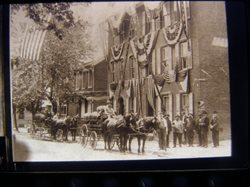 In 1867, Kostenbader and Schaffer founded the Eagle Brewery at Railroad St between Mulberry and Willow. It soon became one of Catasauqua’s leading industries. In 1872, Kreutzer bought Schaffer’s share. After Kreutzer’s death in 1876, the business was run solely by Kostenbader until 1902, when his sons joined him in the business. The business continued to operate as Kostenbader and Sons, after his death in 1909. 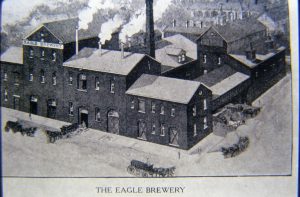 In 1921, the Kostenbader sons sold out to a group of coal region investors, incorporating under the Eagle Brewery name. They made near beer, switching back to real beer at the end of prohibition. In 1936, controlling interest was purchased by J. Oliver Doern of NYC and Martin Schneider of Germany. Along with Joseph V. Burns of Catasauqua, they changed the name to Old Dutch and continued operating out of this building. In 1941, a new bottling house was built and production expanded to 60,000 barrels that year. Doern served on the board of the Brewers Association of America and was elected President in 1949. By 1948, sales had increased to 100,000 and demand continued to outpace expansion. By 1952, there were 70 employees, operating three shifts; at the peak of production, producing 106,000 barrels. The Lebanon Valley Brewery was purchased and that beer added to production in Catasauqua. Old Dutch Beer, known as “Pennsylvania’s Best” was brewed with hops and barley from Bavaria, malt from Wisconsin, and was consistently rated better than beers from much larger breweries. 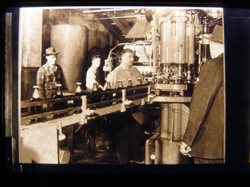 The brewery was 100% union and employees made more than those employed at Bethlehem Steel. There were 13 local breweries in the Brewery Workers Local. Eventually, the small breweries could not keep up with the expansion and modernization afforded larger companies. Old Dutch closed in 1964. The brewery was dismantled in 1976. Al Regits tells a story of Palmer Hoch, who had a farm, barn and stable at the corner of Bath Avenue and Bethlehem Road. Mr. Hoch would bring his horse and wagon to the Eagle Brewery to load up on residual hops which he would spread on his fields for fertilizer. While he was waiting for the hops to be loaded, he would help himself to beer; inside the brewery was a sink with two taps, one for cold water and one for beer. He tethered his horse to a weight, and while Mr. Hoch was drinking, the kids would sometimes put the weight on the wagon and yell at the horse to ‘GO’; the horse would walk the whole way back to the farm, stopping at every intersection along the way, while Mr. Hoch got sotted.

Other Site History
Kostenbader bought 44 perches from Frederick Eberhard, lots previously owned by Charles Deily, which was Lot 19 of 38 city lots laid out by Frederick Biery.
Hassler’s store on Front (recently the video store) between Willow and Mulberry had a barn in the back on Railroad St, with cattle in the 1930-50s.