The Bierys purchased 350 acres bordering the Lehigh River and the mill creek in 1801. Frederick Biery was an early enterprising businessman and made many improvements in the area. He operated Biery’s Ferry crossing the Lehigh, and in 1824 built a chain bridge, operating it as a toll bridge, charging .01 for foot traffic and 35.5 cents for a 6 horse carriage. In 1852 after a flood swept away the chain bridge, the bridge was replaced by a covered wooden bridge. The bridge continued as a private toll bridge until 1892, at which time the county purchased it, and an iron structure was built.

The Bierys built a stone hotel/tavern (8 Race Street) in 1826 , which also served as the first post office from 1844 to 1846; a stone home (7 Lehigh Street) where Frederick Biery resided in 1830; and a stone residence (2 Race Street), which in 1835 would expand to include a store for the canal boat traffic. 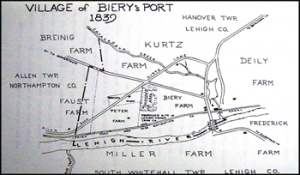 Biery’s Port is on the National Registor of Historic Places in recognition of its early contributions to the settlement of the area and development of the nation’s iron industry.

When David Thomas arrived at Biery’s Port in July 1839 to measure and lay out the plans for the construction of the Crane Iron Works plant, he and his son Samuel had their first dinner with the Deilys in the George Taylor house. The Deily family had purchased the 159 acre Taylor farm in 1823, and for the next 100 years a Deily and or family member would own, live on, or operate the farm that was once owned by George Taylor and upon which his house still stands. The Thomas’s spoke Welsh, the Deily’s spoke German, and the Scots Irish spoke English. The skills and traditions of all combined to build the community that would become Catasauqua.

A sketch of Biery’s Port as it would have looked in 1839 shows only tthree roads in existence at that time. Race St led from the river crossing to the Scots Irish Settlement centered at Weaversville. It ran past the mill and mill race. Howerrtown Road led from the old farmhouse on Race St – now the drycleanerrs, which became the early home of the Biery’s – north to Howertown. What is now 10th Street was the road from Race St to the Kurtz farmsteads, continuing onto the Peter and Faust farmhouses.