As its historical marker denotes, Biery’s Port was originally centered around a grist mill, reflecting its agricultural economy. In the 1830s, the small community was little more than a handful of stone dwellings–two taverns, a Presbyterian Church and some other homes–clustered near a chain bridge operated by the Biery Brothers, Frederick and Henry. The brothers, who owned practically everything in the village, charged 37.5 cents per carriage as a toll. When

David Thomas arrived in 1839 to build an iron furnace, he described the area and its people in a letter. 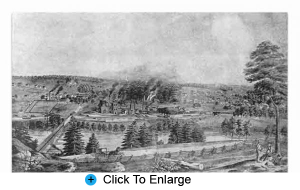 “We live in a fertile country where every sort of grain, vegetable and fruit is abundantly grown. The climate is very healthy; and the weather has been hitherto very good. The people are hospitable and kind, chiefly from German origin. There is much of that language spoken here which I am learning very fast. The children can talk it better than I can.”

It attracted many others too. With one of the locks of the Lehigh canal located one mile south and

Crane Iron Works one mile to the north, it became a popular stop for canal users and home for many Crane employees.

As was common in early nineteenth century towns, people’s homes in Biery’s Port were located beside businesses and not far from small factories and

other forms of industrial activity on the Lehigh River. Most of the buildings are made of wood or brick, are two stories tall and are of the architectural styles of Federal or Greek Revival vernacular. As the population grew, residents soon adopted the name Craneville for their community, but eventually became frustrated by misplaced mail intended for Craneville, New Jersey. After considering the name “Sideropolis”–Greek for Iron City–they settled on an Indian word, Catasauqua, a term meaning “dry ground” and the name of the local creek.